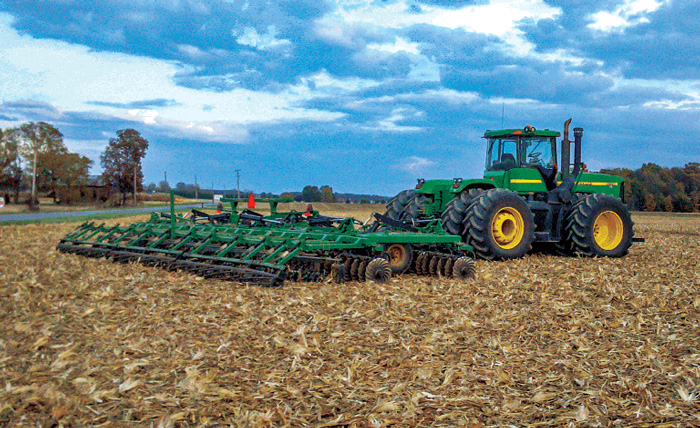 No-till and vertical tillage got bad press after washed-out stalks filled up roads and ditches, but here are some valuable tips and techniques for using these machines without ruining your no-till objectives.

TRIAL RUN. Peru, Ind., no-tiller Jack Gable’s objective with vertical tillage was to size residue, level the field and make it a better planting surface for his soybeans. The first year he rented his neighbor’s 40-foot Great Plains Turbo-Till, he ran it in the fall and spring. While it sized the stalks well, he says it was too fluffy and dry during spring planting.

When heavy rains hit the Midwest this growing season, it did more than saturate soils.

Corn stalks from last year’s harvest and other plant debris washed off farm fields and into ditches and roads, leaving local residents less than pleased with their neighboring farmers. The situation was so bad in one county in western Ohio that snowplows were used to clear the roads, The Lima News reported.

What caused this heavy wave of washed-up stalks? Many observers pointed the finger at no-tillers because the practice leaves residue on top of the soil surface and more vulnerable to movement. But others suggested it wasn’t no-till causing the problem, but the rising adoption of vertical tillage.

Editors at No-Till Farmer set out to shed some light on this controversy, and identify steps no-tillers can take to use vertical tillage on their farm without making a mess of their protective layer of residue.

If a no-tiller is seeing washing on his field from vertical tillage, it may be because of density layers in the soil that have never been reset or removed, says Tom Evans.

Premium content is for our Digital-only and Premium subscribers. A Print-only subscription doesn't qualify. Please purchase/upgrade a subscription with the Digital product to get access to all No-Till Farmer content and archives online. Learn more about the different versions and what is included.
KEYWORDS AerWay Cover-crop seeding Great Plains McFarlane residue movement Salford subsoiling Vertical tillage

Can You Use Vertical Tillage Without Destroying No-Till?

Vertical Tillage: A Gateway Tool To, Or Away, From Conservation?

[Webinar] Can Vertical Tillage Work Without Disrupting a No-Till System?