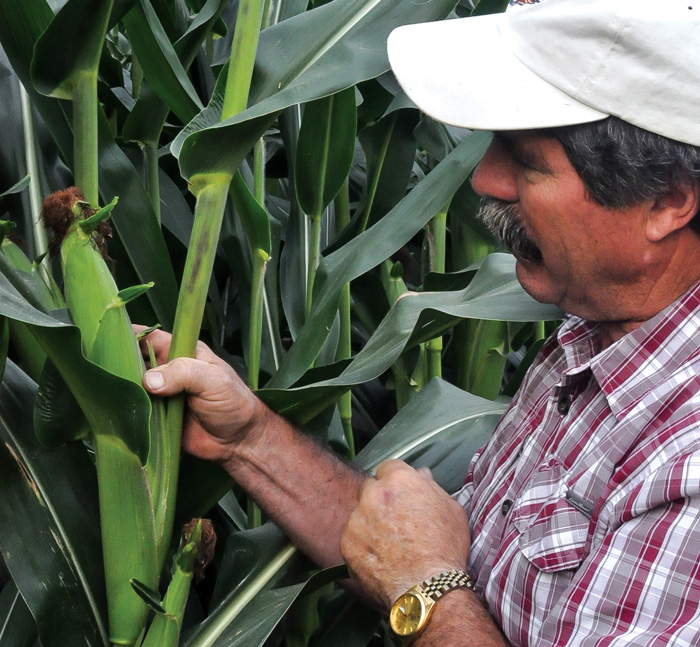 With a focus on conservation, Rob Stout is aiming to keep nutrients in his Iowa soils and out of streams that feed into the Mississippi River.

KEEP IT GROWING. Rob Stout examines an ear of corn on his field in southeastern Iowa. The 30-year no-tiller has been focusing on feeding the corn crop with swine manure, at-plant fertility applications and sidedressing.

It’s a belief he put into practice before he adopted no-till and in the 30-plus years since. Today, his focus is not only on protecting his soil with no-till and cover crops, but also protecting local streams by filtering nitrates from his tile lines and perfecting the fertility program on his 1,100-acre corn-and-soybean operation in Washington, Iowa.

Stout knew something had to change when a big spring rain event in 1979 resulted in some terrible erosion on his farm.

“We had a chisel plow and there was enough erosion that I didn’t like the looks of it, and thought we needed to change things,” Stout says.

But before making the jump to no-till in 1983, Stout wanted to observe how it went for other growers in the area and attended some local field days to investigate the practice.

“I don’t need to make every mistake, so I watched some neighbors and learned from them to see what was working,” he says.