Nebraska no-tiller Greg Anderson has proven that with the right conditions, fertility program and crop protection plan, continuous soybeans are just as profitable as irrigated corn.

When it comes to rotations, Greg Anderson’s farm is the exception to the rule.

Unlike the majority of his neighbors in Nebraska following a corn-soybean rotation or continuous corn, Anderson has been in a continuous soybean rotation since 1990, aside from some hay and grass he grows for his cow-calf operation.

The Newman Grove, Neb., no-tiller became interested in focusing solely on soybeans in the 1980s after talking to a friend who was already doing it. Being a dryland farmer in an area where there’s a lot of irrigation, Anderson says he thought it might be a nice way to streamline his farm and concentrate harder on one crop.

Now completing his 26th season of continuous soybeans, Anderson’s crop is still profitable and he has no intention of going back to a corn-soybean rotation.

When Anderson made the jump to continuous soybeans, he was still conventionally tilling, primarily for weed control.

But he and his father, who he was farming with at the time, started thinking about the long-term sustainability of the farm and became interested in no-till.

“We saw the advantages of what no-till could bring us, especially conserving moisture,” Anderson says. “Being a dryland operation, we didn’t have to make that double pass with a disc and incorporate herbicide. We could no-till and save that moisture early.” 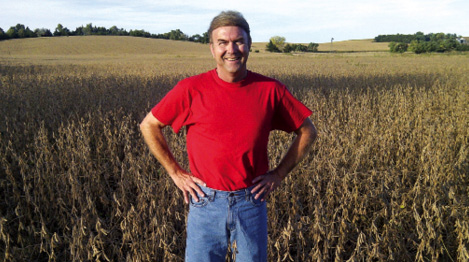