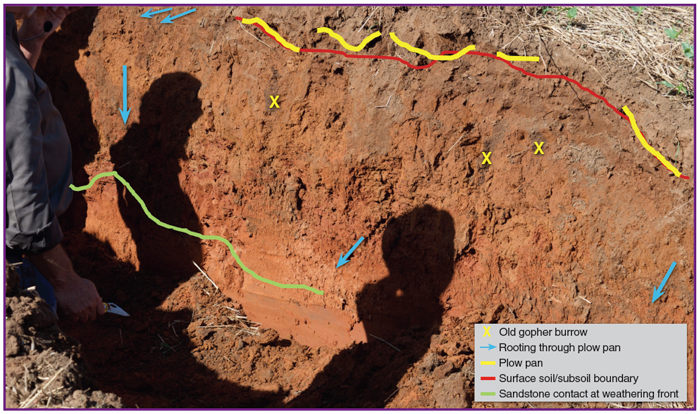 Digging a soil pit can help no-tillers understand both the limiting factors of their soils, and what makes them tick, as they work to build soil health and higher yields.

A SOIL PIT dug on no-tiller Alan Mindemann’s farm recently shed light on the role no-till practices play in increasing organic matter and making soils more productive. The pit was dug in mid-July on the long-time no-tiller’s farm near Apache, Okla., as more than 50 farmers attended a No-Till on the Plains Whirlwind Expo event.

The sandy loam field where this root pit was dug had been developed from sandstone, shaped by plant and animal action that broke up the rocks and slowly turned it into soil, says Greg Scott, a soil scientist for the Oklahoma Conservation Commission.

The variable topsoil depth of 2-8 inches (red line) shows it was farmed and eroded in the past. And while the total depth of the soil is only about 3 feet deep, Mindemann is still harvesting 70-bushel winter wheat from it.

Scott notes the plow pan (yellow line) has become discontinuous and almost completely disappeared in places because it’s being destroyed by natural processes. Mindemann pegged the organic matter in this field at 3.4%.

“Even where pockets of it still exist, earthworms have created channels through it and we’ve got roots moving through (blue arrows), so the plow pan’s density has decreased,” Scott says.

No-tillers digging a soil pit should look for…

Premium content is for our Digital-only and Premium subscribers. A Print-only subscription doesn't qualify. Please purchase/upgrade a subscription with the Digital product to get access to all No-Till Farmer content and archives online. Learn more about the different versions and what is included.
KEYWORDS beneficial fungi earthworm channels glomalin krotovina No-till On The Plains No-till practices organic matter rooting depth

A Closer Look At The No-Till Underground