Making Dollars And ‘Sense’ With No-Till

By Clair Urbain posted on August 1, 2014 | Posted in Precision Agriculture

From spraying to planting to soil sampling, Missouri no-tiller Garrett Riekhof crunches the math on nearly every equipment and precision investment to get the highest possible ‘ROI’ to the bottom line.

When it comes to running a no-till operation precisely and profitably, Garrett Riekhof pushes the pencil on every aspect of his fifth-generation farm.

Whether it’s choosing a rotation, sampling soils or adopting precision technology, figures and numbers are the foundation for his decisions.

“I’m finding there’s as much or more money to be made in my office as there is in the field or in the shop,” says Riekhof, who no-tills 1,350 acres of white corn and soybeans near Higginsville in west-central Missouri.

While growing white corn for human consumption is no different than growing yellow corn, Riekhof says it nets a $.45 to $1 per premiums.

“We don’t mess around with trying to raise both yellow corn and white corn. Raising only white corn simplifies things,” he says.

After more than 20 years of no-till, Riekhof says fields have higher organic-matter levels and rejuvenated topsoil. But he’s reluctant to peg a specific yield increase on no-till practices alone.

“With the advances in genetics and other farming practices, it’s tough to determine what yield might be today if we hadn’t started no-tilling 25 years ago,” he says.

His fields have as many as eight soil types and he is searching for ways to leverage population and fertility to his bottom-line benefit.

Riekhof starts by pulling all soil samples on grid sizes between 4.5 and 8.5 acres each, depending on field size and variability. This work is done onfarm, rather than contracting it out. 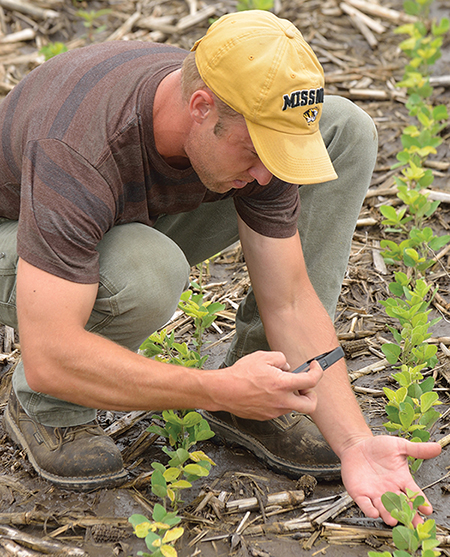 He hopes to move…

Premium content is for our Digital-only and Premium subscribers. A Print-only subscription doesn't qualify. Please purchase/upgrade a subscription with the Digital product to get access to all No-Till Farmer content and archives online. Learn more about the different versions and what is included.
KEYWORDS Corn economics Field RTK Sampling soil Soil Sample