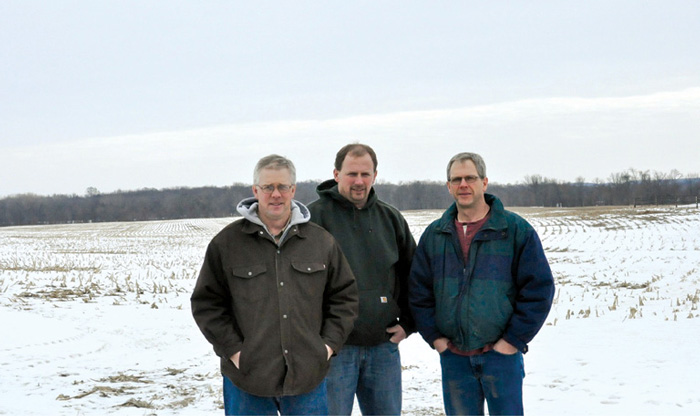 With no-till protecting their soils from erosion, the Schlarmanns are focusing on fertility, soybean yields and soil microbial activity.

FAMILY COMMITMENT. The four Schlarmann brothers (Mike, Dave and Dale from left to right, not pictured, Ken) have been continuously no-tilling their 2,000 acres at Worthington in northeastern Iowa since the mid-1990s. The practice has held their sandy soils against wind erosion and improved soil structure and health.

When the Schlarmann family started no-tilling in the 1980s to save their sandy soils from wind erosion, they eased into the practice by trying it on a piece of land here and there.

But whenever weeds popped up — like 3- to 4-inch-tall ragweed — they went back to working the soil, until they realized it wasn’t helping.

“Afterward, we’d have to spray the field anyway,” Mike Schlarmann says. “Because you don’t kill them all. We figured out we shouldn’t have worked the soil. We should’ve just sprayed, planted and went from there.”

In their last 3-4 years of using tillage, they only worked the end rows and it was still causing too much erosion.

“The erosion on the end rows was phenomenal,” Mike recalls. “And it seemed like we had worse compaction than if we didn’t do anything to it.

“We found out that even if it was compacted, having an even soil density was better than having the topsoil loose and soil underneath hard,” Dale Schlarmann adds.

With the help of Roundup Ready crops, the Worthington, Iowa, family decided in the mid-1990s to commit to no-till, and they never looked back.

Premium content is for our Digital-only and Premium subscribers. A Print-only subscription doesn't qualify. Please purchase/upgrade a subscription with the Digital product to get access to all No-Till Farmer content and archives online. Learn more about the different versions and what is included.
KEYWORDS cereal rye cover crop foliar fertilizers residue breakdown stalk roller twin-row soybeans wind erosion