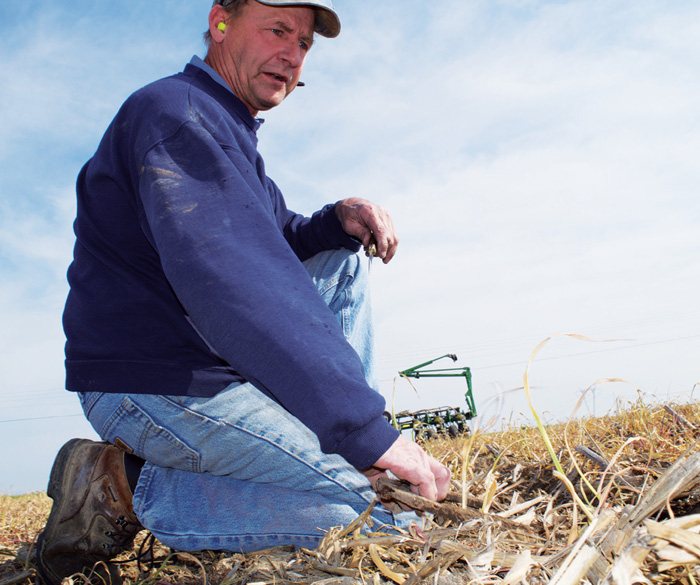 Gordon and Jeff Smiley are finding quick success with a one-two nutrient punch from fall manure application and cover-crop cocktails.

HEALTHY SOILS. Gordon Smiley (left) and his brother Jeff have no-tilled soybeans for 15 years, but only no-tilled corn starting in 2011. They’ve found that seeding cover crop cocktails in the fall — and following that with manure applications — feeds soil biological activity year round. “It’s been an evolution,” Gordon says. “We’re starting to feed the soil instead of feeding the plants, as they say.”

Having no-tilled soybeans for many years, Gordon and Jeff Smiley faced a more difficult task 4 years ago, switching to no-tilled corn instead of holding on to their conventional system.

But a combination of no-tilling, manure application and cover-crop cocktails is working well for the Smileys, who set personal records for corn yields both last year and in 2013 with over 200 bushels per acre.

The Smileys raise corn, soybeans and barley and operate a farrow-to-finish hog operation on 1,200 acres near Greensburg, Ind., about 50 miles southeast of Indianapolis.

They got their no-till start 15 years ago by drilling soybeans with a John Deere 750 drill, and credit their agronomist, Rick Scranton, and neighboring no-tillers for helping them improve their no-till operation.

“It’s been an evolution,” Gordon says. “We’re starting to feed the soil instead of feeding the plants, like they say. The last 2 years the local Soil & Water Conservation District has done soil plugs and we’ve found root channels 18-37 inches deep from the cover crops. And we’re finding earthworm channels down 15-20 inches with roots growing in them.”