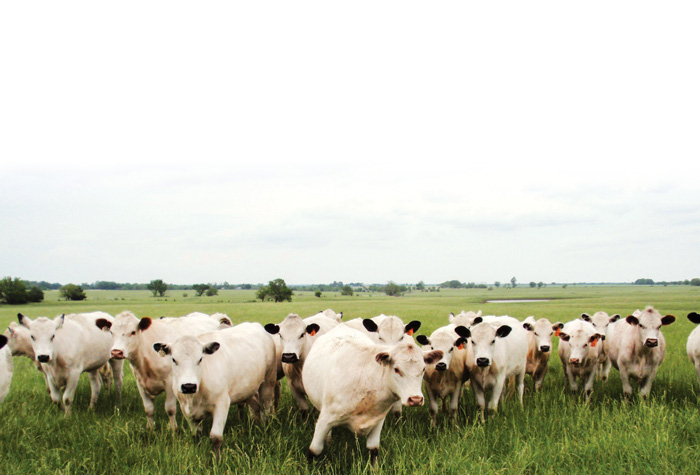 HOOVES WORK. The Williamses incorporated a herd of British White cattle into their operation. Cover crops provide forage for rotational grazing, while the grass-fed cattle will be direct marketed, earning additional revenue for their operation.

Farmers in the local coffee shop may have plenty to say about the most unconventional farming operation in Waverly, Kan.

But Darin and Nancy Williams are more interested in continuously adapting their innovative combination of no-till, cover crops and rotational grazing.

Their 2,000-acre operation includes a complex rotation of non-GMO corn and soybeans, grain sorghum, cereal crops such as wheat, triticale, rye and barley; and cover crops that include sudangrass, millet and sunflowers.

In addition, the husband-wife team raises herds of grass-fed British White cattle and Katahdin hair sheep, as well as small flocks of heritage turkeys and chickens — both broilers and layers.

“God didn’t make me with a brake pedal,” Darin says. “The main thrust of our farm is building organic material and having fun.”

Darin grew up in Waverly and always had an interest in farming. His father bought 60 acres when Darin was in high school and Darin helped him get started farming for 2 years before graduation. However, he himself would not farm full-time for more than 20 years.

“I believed that I couldn’t make a living from farming, even though that is what I wanted to do,” he explains. “I wish that I knew then what I know now.”

Darin earned a degree in carpentry from Bob…