Farmers grew their total percentage of farm acres and average number of acres per farm being strip-tilled in 2014.

Strip-till remains a subset of more widely adopted conservation tillage practices, including no-till. According to the 7th Annual No-Till Operational Benchmark Study published by No-Till Farmer earlier this year, about 7.7% of cropland acres were strip-tilled in 2014, compared to 76.5% in a no-till system.

However, a closer look at the numbers from the 2015 strip-till study reveals increases in both average acreage and percentage of total farm acreage being strip-tilled by farmers. Respondents strip-till an average of 948 acres, compared to 877 acres reported in the 2014 strip-till study. 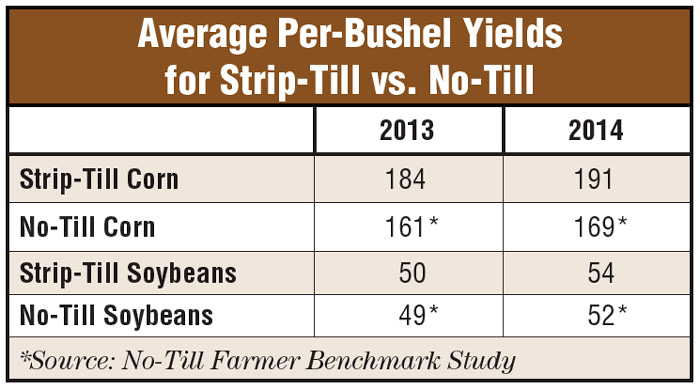 Consistent with the overall increase in acreage being strip-tilled are rises in the average number of strip-tilled corn and soybean acres.

This year’s study reveals that farmers strip-till an average of 737 acres of corn, which is a 20-acre increase over the 2014 survey. Corn also remains the most popular crop farmers are strip-tilling, with 97.2% of respondents taking this approach, compared to 98.0% last year.

Strip-tilled soybeans also increased in popularity during the last year, with the average number of acres growing from 444 in 2014 to 476 this year. Only about 25% of respondents to last year’s survey said they strip-tilled soybeans, but that number increased dramatically to 38.6% in 2015.