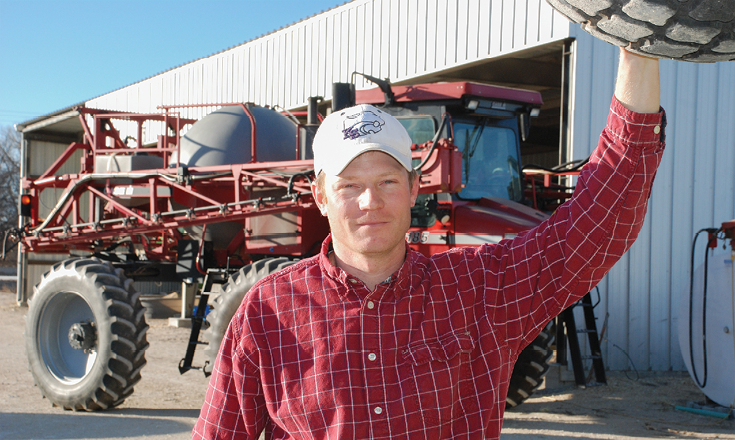 Adopting no-till, along with a diverse crop rotation and varied mix of covers, has allowed Chad and Danny Simmelink to grow their bred-heifer program.

Cows and cover crops are a winning combination for Kansas no-tillers Chad and Danny Simmelink.

No-tillers since 2003, the father-and-son team added cover crops to their rotation 3 years later and found covers not only build soil organic matter and reduce erosion, but make an excellent feed source for their bred-heifer program.

Danny Simmelink was a believer in minimum tillage well before the family started no-tilling. He and his father used a “v-blade” for several years, leaving crop residue on the soil surface while killing weeds below the surface. The Simmelinks moved further into no-till when better equipment became available.

“Originally, we wanted to save labor,” Chad recalls. “But we found that with no-till, we had potential for much better crop yields, too.”

Saving Residue. The Simmelinks farm about 2,500 acres in Jewell County, near the Nebraska border in north central Kansas. They receive about 25 inches of annual precipitation and their crop rotation includes wheat, cover crops and corn, or grain sorghum, soybeans and winter wheat.

In the 11 years they’ve no-tilled the farm has evolved from a rotation dominated by wheat to a system in which fall crops have become more lucrative.

The Simmelinks began using soybeans in the rotation in place of sunflowers in 2003. They had used stalks to support their bred-heifer program early in their no-till adoption, but cattle would eat too much residue.

What I've Learned from No-Tilling: Why It Pays To Boost Air And The Water-Holding Capacity In Your No-Tilled Soils