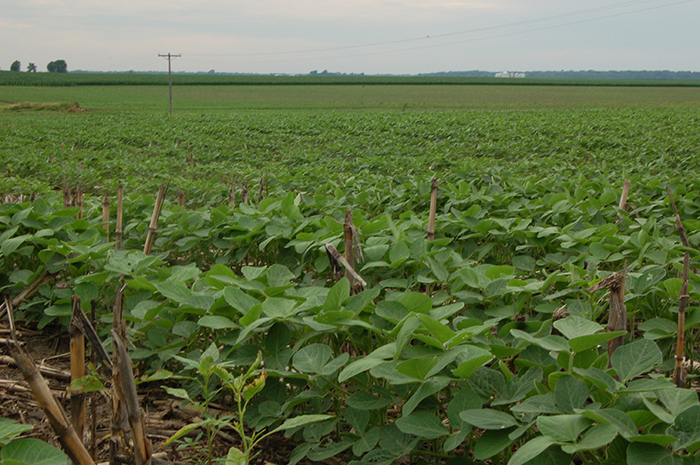 By Laura Barrera posted on May 18, 2015 | Posted in Crop Protection

No-tillers may already have this parasitic soybean pest, but rotating crops, using resistant varieties and adding seed treatments can help them win the battle.

There are two kinds of soybean farmers in the Midwest, Greg Tylka says: Those who are concerned about soybean cyst nematodes (SCN), and those who should be.

The Iowa State University plant pathologist showed attendees at the Iowa Soybean Assn. Research Conference just how much SCN has spread in the Midwest over the last several decades.

As of 2014, 30 states from the East Coast up into the Great Plains have been affected by SCN. Random sampling found 3 out of every 4 fields in Iowa have SCN, and it’s present in 4 out of every 5 fields in Illinois.

Tylka explained why this parasite is difficult to terminate, and what no-tillers can do to limit its presence.

Nematodes are colorless, microscopic worms that start out as eggs that feed on soybean roots, Tylka says. When they’re mature enough they’ll mate outside of the root, and the female will produce eggs.

“This female will be mated by many different males, and a male will mate with many different females,” Tylka notes. “What that means is the offspring aren’t identical, genetically. And that gives the nematode great ability to adapt to different conditions.”

The female will produce about 50 eggs outside of her body, he adds, and then she’ll fill up internally with another couple hundred eggs. Eventually the female nematode dies and turns into a cyst — a dark brown, tough, leathery shell full of eggs — and the process starts over.

This life cycle occurs about every…

Premium content is for our Digital-only and Premium subscribers. A Print-only subscription doesn't qualify. Please purchase/upgrade a subscription with the Digital product to get access to all No-Till Farmer content and archives online. Learn more about the different versions and what is included.
KEYWORDS resistance management seed treatments soybean cyst nematode