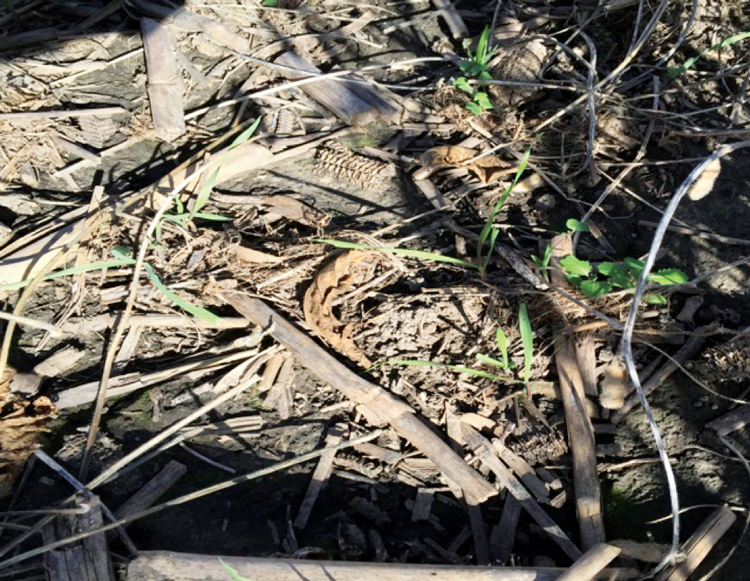 By John Dobberstein posted on May 18, 2015 | Posted in Cover Crops, Equipment, Nutrient Management

Iowa no-tiller Roger Harrington has seen his share of challenges with covers, but has found a combination that saves soil, adds nitrogen and reduces erosion and weed pressure.

But he’s got some challenges farming in southeastern Iowa, near Ollie, getting covers seeded in a timely manner and dealing with winter hardiness in some species. He’s had trouble, too, finding legumes to add N for his corn crop.

Harrington says he’s not afraid to take home ideas that he picked up at conferences and try them on his farm.

“I want to share that not everything I took home worked. There’s a process needed to find things that do work,” he says.

A no-tiller since 1980, Harrington grows mostly a split of corn and soybeans on 1,300 acres, along with up to 80 acres of no-tilled alfalfa, 3 acres of pumpkins and 5 acres of sweet corn. He also has 40 head of Boer goats that feed on a small pasture with a 2½-acre lake.

Harrington signed up for the Conservation Security Program several years ago and agreed to seed cover crops. He’s been working covers into his rotation for 6 years, with a desire to increase organic matter and soil biological activity and reduce erosion.

Premium content is for our Digital-only and Premium subscribers. A Print-only subscription doesn't qualify. Please purchase/upgrade a subscription with the Digital product to get access to all No-Till Farmer content and archives online. Learn more about the different versions and what is included.
KEYWORDS cover crops in cool climates cover-crop mixes covers in cooler climates Keeton seed firmers Kinze 12/23 split planter Roger Harrington seeding cover crops