The flexibility to harvest grain with either a combine or hooves is how Jimmy Kinder is protecting his no-till farm from market volatility.

Near Walters in southwestern Oklahoma, Kinder raises wheat, canola, grain sorghum and sesame on 5,000 acres. He also manages 2,000 acres of grass to go along with his 1,000-head stocker-cattle operation. Kinder has been running stocker cattle for 49 years.

When Kinder spoke at the No-Till on the Plains conference earlier this year, he discussed “climate, crops, cattle and covers” and the new volatility he’s seeing both in ag markets and the weather.

In 2008, for example, his farm saw 40 days of 105 F daytime highs or better. He’s seen 6 feet of pan evaporation on his farm as the drought has continued. Kinder says maintaining flexibility with his cattle and grain operations has helped him weather some economic and climatic volatility.

Kinder turned to no-till in 1994, starting on a small field, and by 1999 he was 100% no-till and hasn’t plowed any fields since. The practice interested him for both economics and conservation.

“I don’t know if I’d be farming if I had to stay conventional,” he says. “Farming during the summer took up every bit of time and beat you down with plowing. Plus, I used to hire two or three more employees just to run all that stuff. There’s a reason no-tillers have a smile on their face, it’s an improved quality of life.” 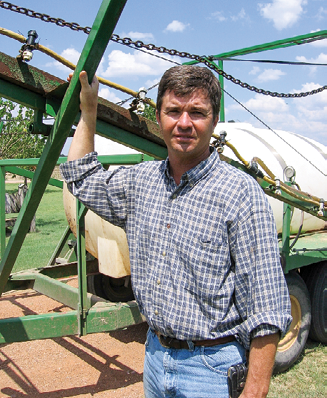