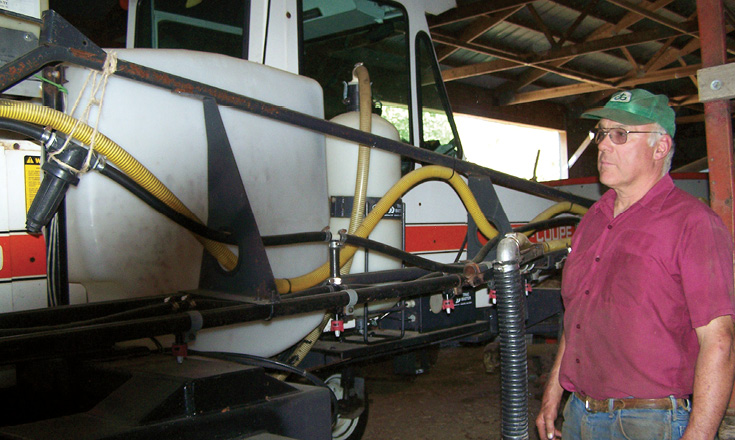 When he turned to no-till in the mid-1980s, Wayne Harrison estimates as much as half of the original topsoil on some of his fields was already gone.

“Our situation was typical of west-central Wisconsin, where tilled farmland was prone to severe wind or water erosion for generations,” he says. “Anything we could do to reduce our soil losses seemed like the way to go.”

Two center pivots supplement rainfall on about 250 acres of the lighter soils.

“We have about 10 fields across a 10-mile area with soil types ranging from sand to bottomland. Lots of different challenges,” Harrison says.

Over 25 years, the Wisconsin farmers have successfully boosted yields while holding erosion losses to a minimum. They rely on a simple, cost-reducing no-till system, and turn to new engineering and agronomic technologies if they show economic promise.

Harrison says he realized early on that succeeding at no-till would take time, and some patient was required. They didn’t see much, if any, soil changes or yield boost from no-till the first 2 or 3 years.

But in years 4 or 5 — and ever since — the benefits have been obvious.

“With less soil disturbance and a cover of crop residue, we got moisture savings that resulted in bigger grain harvests per inch of rainfall,” Harrison…