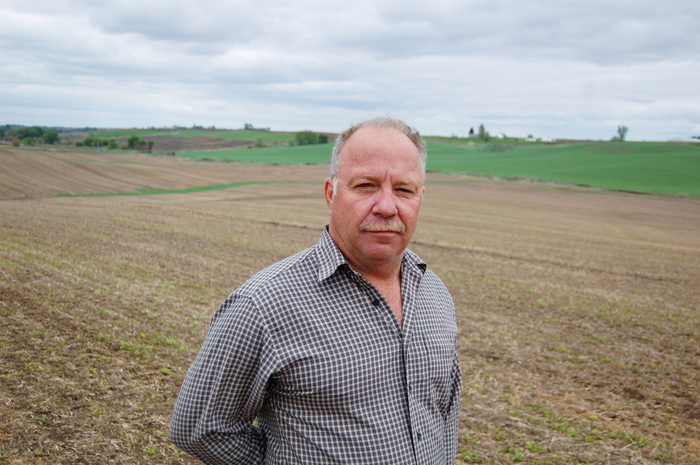 Sometimes Joe Kriegel cringes when he drives past farms in his county and sees erodible hilltops that have been worked.

There was a time, decades ago, when Kriegel moldboard plowed soybean stubble in the fall for his dad, but that’s no longer the case today on his 2,000-acre farm near Brooklyn, Iowa.

Kriegel and his sons have built a 3-year rotation of narrow-row corn, soybeans and cover crops that has reduced erosion and mellowed once heavily tilled soils, some of which are now capable of producing 200-bushel corn.

Kriegel, who farms with his sons Patrick, Nicholas and Jared, began pursuing no-till practices in the late 1980s to reduce labor and fuel use, but also cut down on erosion issues. Kriegel’s terrain in Poweshiek County is hilly, with some of his fields having C and D slopes.

Kriegel says he was one of the first farmers in his area to no-till soybeans into cornstalks, and other farmers who saw the results began hiring him to do custom no-tilling. Some customers weren’t so convinced about no-till in the early years.

“I had one guy who I was doing custom soybean planting for and he always wanted to disc and cultivate the fields beforehand,” Kriegel says. “I told him he would grow better soybeans if he let me go no-till. But he said, ‘Oh, I just don’t like the looks of those stalks out there.’ I said to him, ‘When those beans get a foot tall, you won’t see that.’

Premium content is for our Digital-only and Premium subscribers. A Print-only subscription doesn't qualify. Please purchase/upgrade a subscription with the Digital product to get access to all No-Till Farmer content and archives online. Learn more about the different versions and what is included.
KEYWORDS cross-planting erosion control hilly iowa Joe Kriegel narrow-row corn