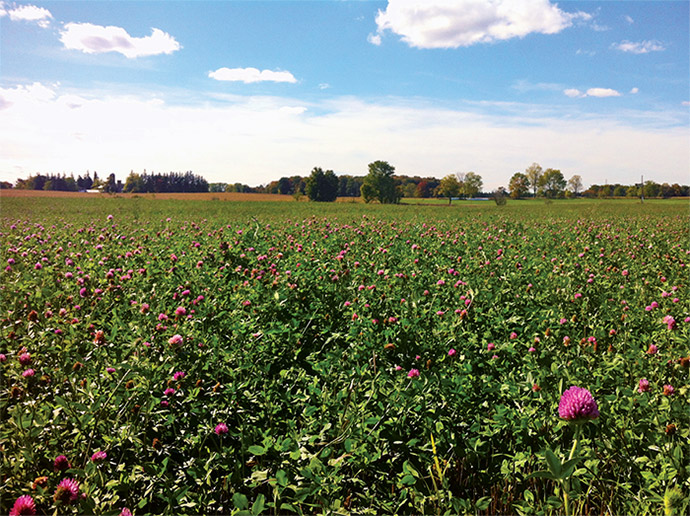 By Laura Barrera posted on January 9, 2015 | Posted in Cover Crops

No-tillers raising winter wheat can use this time-honored practice to boost yields for the following crop, improve soil tilth and relieve compaction, all without hauling out a no-till planter or drill.

When Aaron McQueen started farming 3 years ago, he wanted to seed a cover crop after winter wheat harvest to reduce erosion and increase soil tilth and soil biological activity.

Frost seeding red clover into winter wheat was once a common practice in his area and highly recommended by agronomists, so he decided to try it.

Working with heavy clay soils in Fisherville, Ontario — where he says there’s a plow pan on essentially every field he farms — McQueen was amazed to see how much soil tilth increased after just one year of growing red clover.

The clover also broke up compaction and, thanks to its nitrogen production, McQueen can usually take a 20-unit-per-acre N credit for his following corn crop.

When timed correctly and properly terminated, frost seeding red clover into winter wheat can be a simple, cost-effective practice that provides many benefits to northern wheat growers.

Frost seeding is actually “cracked soil-surface seeding,” says the University of Wisconsin Extension. Growers broadcast the seed while the soil is still frozen and able to carry equipment, and the seeds fall into the cracks of the soil surface. As the soil thaws, the cracks close shut.

“Those cracks seal up and it’s like you planted the seed with a drill,” says Jim Stute, research director of the Michael Fields Agricultural Institution and former University of Wisconsin Extension agriculture agent. “You get great seed-to-soil contact and beautiful stands.”

Not only does frost seeding allow for good establishment without the…

Premium content is for our Digital-only and Premium subscribers. A Print-only subscription doesn't qualify. Please purchase/upgrade a subscription with the Digital product to get access to all No-Till Farmer content and archives online. Learn more about the different versions and what is included.
KEYWORDS Cover crops frost seeding nitrogen red clover Winter wheat

Red Clover Supplies About $40 Of Nitrogen