Promising Technology On Display At Agritechnica

High-performance planters, three-axle sprayers and autonomous-tractor systems could be in the future for no-tillers looking to be more efficient.

Innovative equipment and technology was on full display at the recent Agritechnica farm-equipment show in Hanover, Germany, some of which could play a role in the advancement of no-till in the coming years.

Agritechnica, which convenes every other year, is the world’s largest indoor farm-equipment show. The 2011 event had 2,700 exhibitors and more than 415,000 visitors, up 18% from the previous show in 2009. The event is so large that buses are needed to take visitors between the 24 exhibition halls, some as large as the entire South Wing at the National Farm Machinery Show in Louisville, Ky.

Below is a rundown of some of the most noteworthy innovations at the show that might give no-tillers a preview of technology on the horizon that could make no-till systems more efficient and effective.

Many different planters were on display at Agritechnica, but the one attracting the most attention was the new Tempo released by Vaderstad. The result of more than 5 years of research and development, the Tempo has set a new worldwide standard for capacity and increased seed-placement consistency — especially at higher forward speeds than conventional planters. 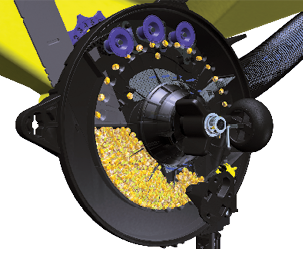 In 2011, the Tempo was compared to three major brands of planters, all 2011 models across different crops and different forward speeds, including passes made at 8 mph. Even at the faster speeds, the Tempo maintained high standards of seed singulation and depth consistency, while the accuracy of the other brands began to deteriorate rapidly at higher speeds.