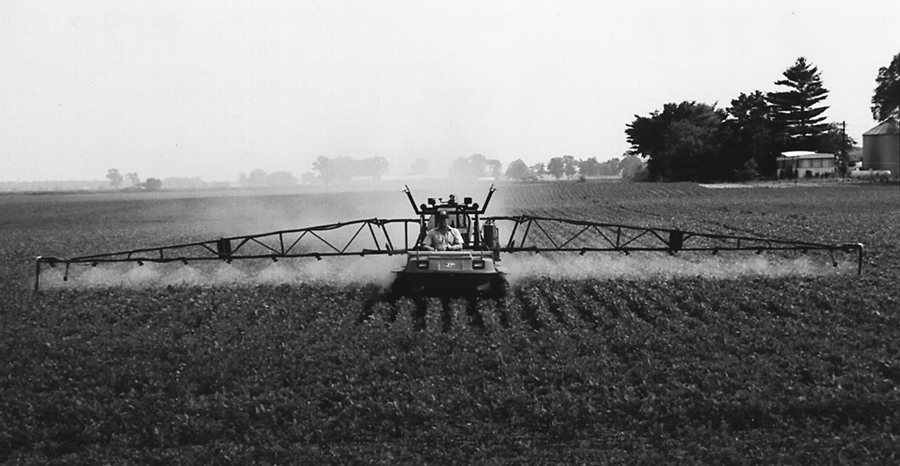 Save Money, Time With ATV Spraying

By Joe Shinners posted on April 1, 1998 | Posted in Equipment

This no-tiller saw his doubts about vehicle diminish after witnessing its multiple uses.

Gregg Orr was skeptical the first time he heard about using an all-terrain vehicle (ATV) for spraying.

The Hamlet, Ind., no-tiller’s apprehension subsided, though, after a friend brought an ATV to Orr’s 1,200-acre farm for a demonstration. Orr has been sold on ATVs and their multiple uses ever since his first look at the vehicle.

“It was so accurate,” recalls Orr. “ With the chemicals costing so much and them being so potent, it’s important for the sprayer to be precise and accurate.”

Shortly after the demonstration, Orr bought an eight-wheel Agro. It has a twin-cylinder, 20-horsepower, liquid-cooled Kawasaki engine. The ATV is capable of reaching speeds up to 16 mph during application.

Orr raves about the versatility of the ATV. He uses it for pre-plant and post-emergent chemical applications, fertilizer top-dressing, soil sampling, fixing fences, plowing snow, mowing and grading.

“I get so much more done and over the acres so fast...”

“I do everything with it,” says Orr. “The speed is the nice thing. I get so much more done and get over the acres so fast because I have higher horsepower than conventional tillage equipment.”

Orr set up his eight-wheeler with 60-inch spacing between the wheels to straddle four rows. The spacing offers stability when he’s pulling his 16-row sprayer and reduces compaction with…