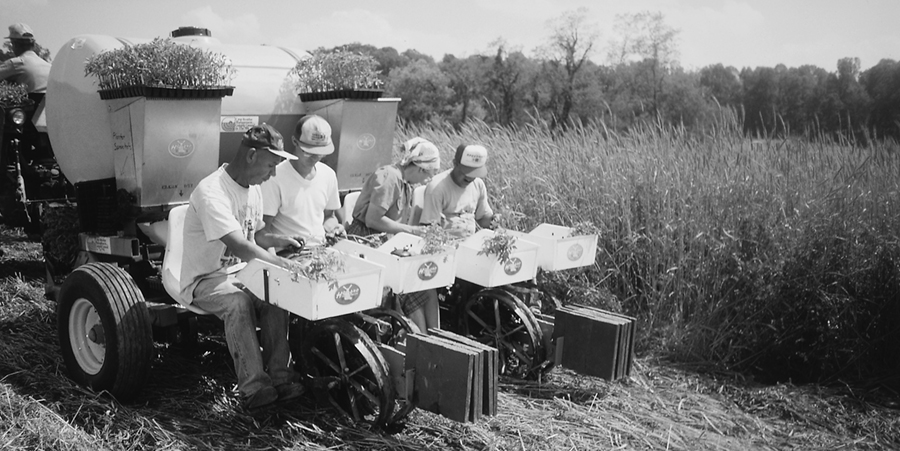 By Darrell Bruggink posted on August 1, 1998 | Posted in Seeding & Planting

Some 15 years ago, no-tilling tomatoes wasn’t even thought to be possible. But no-tiller Steve Groff has found huge success transplanting tomatoes into a thick cover crop with the aid of a Buffalo rolling stalk chopper and no-till planter developed at Virginia Polytechnic Institute (VPI).

Cuts Some, Crimps Some

Prior to transplanting tomatoes, the Holtwood,. Pa., no-tiller effectively kills a jungle-like cover crop mixture of hairy vetch, rye and crimson clover with the rolling stalk chopper and rolls the cover crop down to the ground.

“It’s basically made to chop up corn stalks in the fall and does it on the scale between a disc and a flail miller,” Groff says. “I have adapted this with parallel linkage to roll down the cover crop so I can kink it up and cut some of it.”

For 1998, Groff made collars to place around the bearings of the rollers. This prevented 6-foot-tall rye from wrapping around the bearings. Parallel linkage is necessary for providing flexibility to deal with stones in some fields.

“Even a 2- to 3-inch variation on the width of a 10-foot machine would not give me the kill I wanted for a cover crop,” Groff says. “Then I would have to spray my normal Roundup herbicide rate where even half of the cover crop was killed pretty good. It really doesn’t work the cover crop into the soil, but it lays it over and cuts some and kinks the rest.”