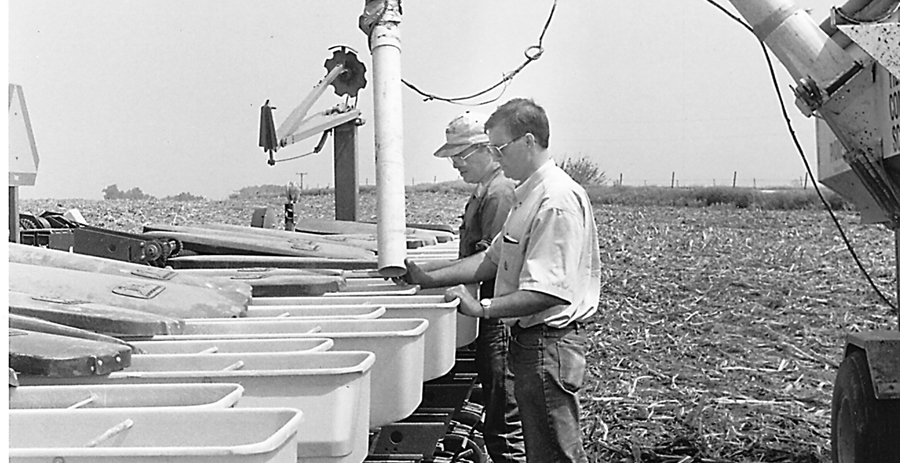 By Julie Orchard posted on August 1, 1998 | Posted in Nutrient Management

When "times were tough," these Iowa farmers used no-till as a management tool to expand their acreage.

During the 1980s, the last thing many growers were looking for was more land to farm. Missouri Valley, Iowa, cash croppers Gail and Duane Witt saw this as an opportunity to expand from 1,200 to 4,000 acres by switching to no-till.

“No-till is what gave us the big edge,” says Gail Witt. “We were able to rent ground when ground was available, and we’ve been able to hold on to it. No-till let us become very efficient.”

In 1980, the brothers began experimenting with no-till corn. By 1983, they were no-tilling all their corn. In 1987, the Witts tried no-tilling soybeans with great success. This led them to increase their acreage in 1988, only to be met with a disaster from drought.

Not the type to give up, the Witts continued to no-till soybeans. By 1991, they were in a continuous corn and soybean no-till rotation.

The Witts are willing to accept new technology. However, they’ve found that what worked for them in the beginning is just about as good as what they’re using today.

When they began no-tilling corn, they used an eight-wave coulter that did quite a bit of tillage ahead of the row unit. As time went on, residue continued to build, so they tried using bubble coulters. Those coulters didn’t work in their clay loam soils. This led them to change to a 13-wave coulter, which is similar to the original eight-wave coulter only narrower.

“We’ve had coulters mounted to the frame of the…

Taking the Lead in No-Till