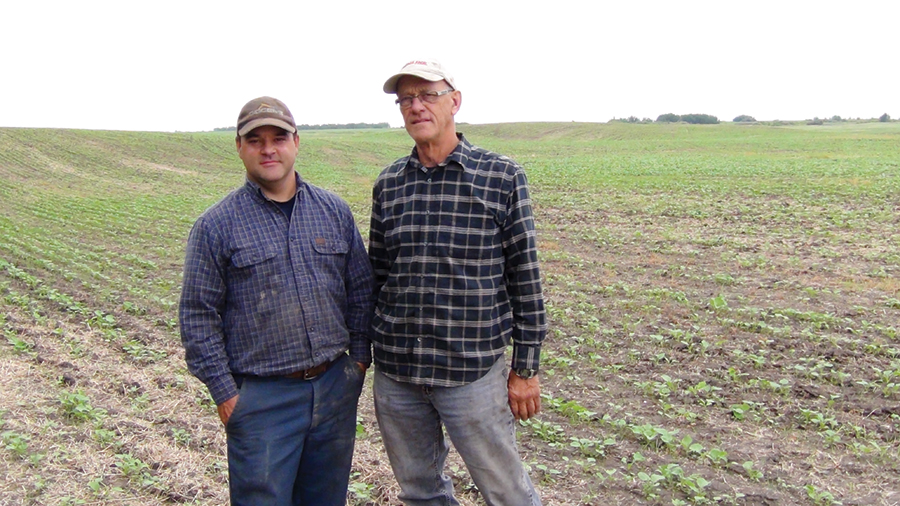 By Loretta Sorensen posted on November 1, 2014 | Posted in Water Management

Twenty-five years ago, an extended dry cycle around Rapid City, Manitoba, prompted Ryan Nevin’s father to implement no-till. Now, in their area’s wettest cycle ever, no-till is still helping the Nevins “get it done.”

“When Dad started no-tilling in the 1980s to save moisture, pretty much everyone else here used traditional tillage,” Ryan says.

“His decision brought improved yields, reduce erosion, increased soil organic matter and lower input costs, all of which we still see today. With excess rain in the last couple of years, it takes time for soils to warm and dry, but no-till is still our best option.”

Wheat, canola, peas, flax and occasionally proso millet make up Ryan’s crop rotation. Planting time frames range from as early as April 20 to as late as June 10. Typically, he plants around May and starts harvest by mid-August.

In an “average” year, the area sees around 10 inches of rain during the growing season and 4 to 5 feet of snow. Because the farm’s Newdale clay loam soils hold moisture, runoff erosion can occur — especially with traditional tillage.

“Undulating terrain” is how Ryan describes the landscape in his fields. Rock ridges are found in a few fields. Over the years, erosion between hills and hollows has caused concern.

“It’s a different kind of soil here,” he says. “Right in Rapid City we have some land that looks like a gravel pile, but we’ve raised 50-bushel wheat there. The wheat is only about a foot tall…

Premium content is for our Digital-only and Premium subscribers. A Print-only subscription doesn't qualify. Please purchase/upgrade a subscription with the Digital product to get access to all No-Till Farmer content and archives online. Learn more about the different versions and what is included.
KEYWORDS canola foliar applications herbicide Manitoba moisture precision ag equipment residue weed control Wheat

When Wet Or Dry, No-Till Rotations, Covers And Cattle Are The Answer