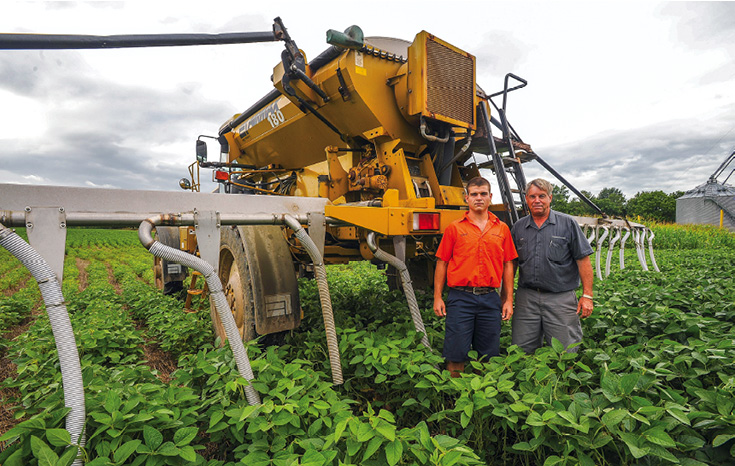 By John Dobberstein posted on October 1, 2014 | Posted in Strip-Till Farming

With help from a fabricator, New York strip-tiller Donn Branton converted a RoGator into a dual-purpose machine that seeds covers and dry fertilizer into standing corn and soybeans.

Seeding cover crops into standing corn and soybeans in a colder climate can be a daunting challenge, so Donn Branton came up with a solution on his farm that actually solves two problems in one pass.

The Le Roy, N.Y., strip-tiller bought a used RoGator 1274C fertilizer applicator and converted it into a highboy seeder that applies cover crops and dry fertilizer into standing crops.

“If we’re done with corn harvest by Thanksgiving we’re early, and by then it’s too late to get something good down for a cover crop,” Branton says. “We’ve used some cereal rye, but the problem is that it can get away from you really quickly in spring.”

With very wet weather seen in recent years, Branton and his son, Chad, have been working with Cornell University on nitrogen-management issues on his farm.

Even though Donn felt there was adequate nitrogen in his fields due to reduced tillage, the university said there was a significant deficit — as much as 100 to 120 pounds in some fields.

To test that conclusion, the Brantons applied 60 pounds of additional nitrogen on cornfields last year and saw a 40-bushel yield increase compared to check strips, “so maybe there is something to late-season nitrogen,” Donn says. “I felt extra nitrogen and cover crops could go hand in hand.”

After talking with no-tillers David Brandt and Jamie Scott at a conference last year, the Brantons came up with a plan to apply dry urea and cover-crop seed…

Premium content is for our Digital-only and Premium subscribers. A Print-only subscription doesn't qualify. Please purchase/upgrade a subscription with the Digital product to get access to all No-Till Farmer content and archives online. Learn more about the different versions and what is included.
KEYWORDS Cornell University Cover crops Fertilizer application New York nitrogen Nitrogen management RoGator ryegrass seeding urea

Get More From Your Nitrogen With Late-Season Stalk Tests