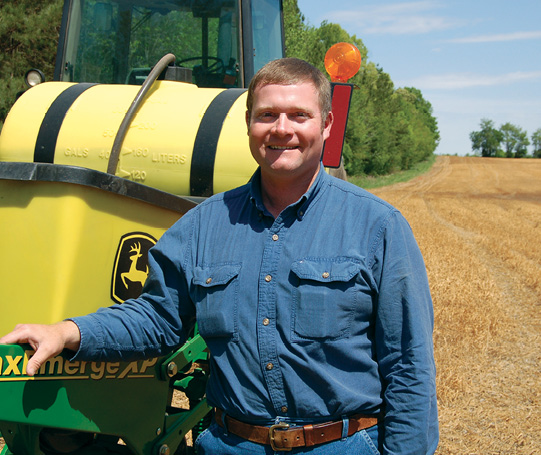 Switching to no-till and investing in precision technology has helped Jason Starnes get more consistency out of the sloping, clay-dominated fields on his family’s North Carolina farm.

Starnes and his father, Kim, no longer spend considerable time repairing gullies or worrying about crusting and poor stands. And they’ve found that residue cover from their corn, soybeans and wheat helps seal in moisture during hot, dry summers.

“The residue on the ground holds water in the soil until the crops need it,” Jason Starnes says. “If we were still doing tillage, the moisture wouldn’t be there.”

The Starneses usually combine wheat in mid-June and immediately no-till soybeans. Corn harvest usually falls around Sept. 20 with wheat planted behind corn in mid-October. Soybeans are harvested around Nov. 5.

With three grain crops raised in a 2-year period, Four S Farms doesn’t make widespread use of cover crops, but the Starneses will plant wheat or barley on some fields, as was the case last fall with a field planted to corn this spring. The wheat or barley is broadcast by a local co-op with a spreader truck and rolled by a culti-mulcher to firm the seed into the ground.

“If we have land that’s rolling, and it’s been no-tilled to full-season soybeans and we’re not planting wheat…