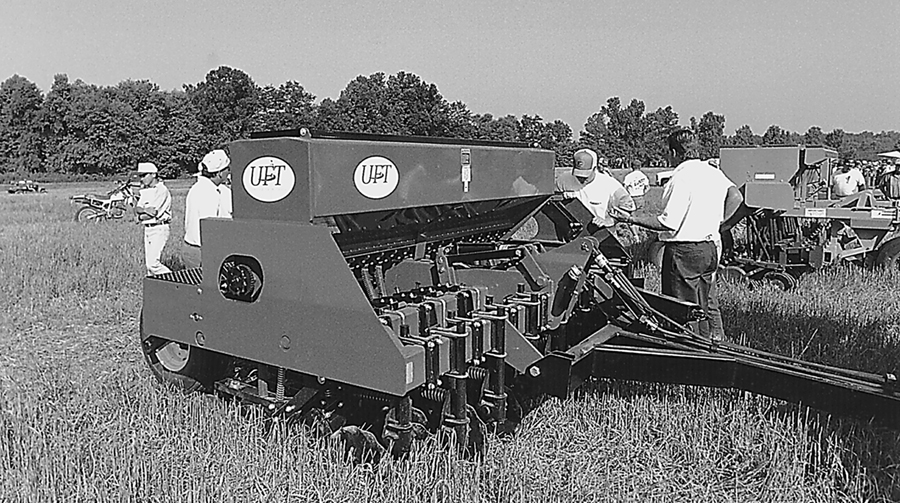 By Katherine Meitner posted on September 1, 1999 | Posted in Equipment

When this lucky lowan farmer attended last winter's National No-Tillage Conference, little did he know he'd be the envy of the event.

The entertainment was over. The dinner was through. It was time for the most anticipated event of the National No-Tillage Conference. Someone in this room would win an Art’s-Way Manufacturing, Co. United Farm Tools drill for one year.

Attendees from around the world sat with their eyes on the stage. A hush swept over the crowd.

Frank Lessiter, No-Till Farmer’s Editor/Publisher, slowly reached into the fish bowl and retrieved the winning ticket. With a smile, Lessiter looked up and announced the name.

“I was in complete shock when I won,” recalls Dean Markwardt of Sheffield, Iowa. “It’s funny because I have a friend that shares planting responsibilities with me and we were talking about doing things differently this spring. But that night, when Frank pulled my name out, we were both stunned. I kept thinking, ‘What am I going to do with this no-till drill?’”

When Markwardt approached the front of the banquet hall, reality had still not set in. He couldn’t believe he had just landed himself the use of a brand new no-till drill for an entire year.

Terry Yarns, vice president of Art’s-Way, made sure he had the essentials to hook up Markwardt with the promised drill. Sure enough, when Markwardt got home from the conference, his phone started ringing.

“Terry had David Almquist from Petersburg, Ill., coordinate the drill for me,” Markwardt says. “When David called, he asked me what I wanted. I told him my old drill was a 15-footer and since he…

Premium content is for our Digital-only and Premium subscribers. A Print-only subscription doesn't qualify. Please purchase/upgrade a subscription with the Digital product to get access to all No-Till Farmer content and archives online. Learn more about the different versions and what is included.
KEYWORDS Art's Way United Farm Tool Drill Dean markwardt National No-Tillage Conference Prize Winner