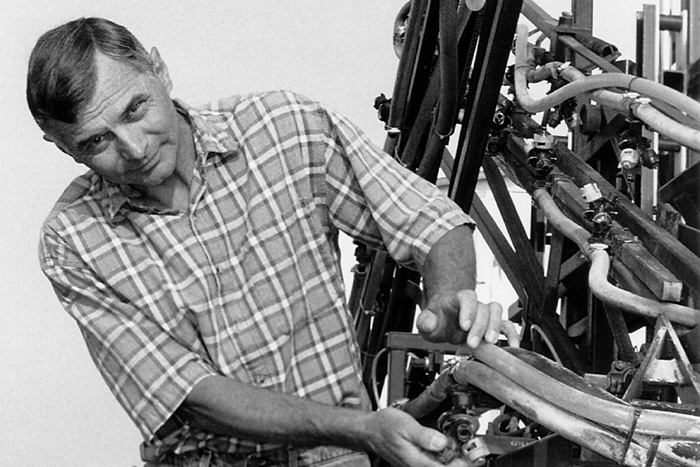 By Julie Orchard posted on February 1, 1999 | Posted in Water Management

Learn how these Iowa no-tillers use no-till to keep planting right on schedule even after heavy spring rains.

Heavy, springtime rain showers are all too common in Paul Thieschafer’s opinion. The Council Bluffs, Iowa, no-tiller knows only too well what havoc these rain clouds can bring to a timely planting schedule.

With flat ground and heavy black gumbo soil, rain water often stays standing in fields for several days to weeks. That’s what first led Thieschafer and his son, Brad, to no-till in the spring of 1980.

“It had been a wet spring, planting kept getting later and later and the fields weedier and weedier,” Paul recalls. “I had a friend who had been no-tilling for five years and he convinced us to try it.”

At that time, the Thieschafers were growing 700 acres of soybeans and corn. Using a conventional-till planter with disc openers, they no-tilled the crops and then sprayed post-emergence herbicides.

“I think we went out to look at it every night,” Paul says. “We kept asking ourselves if this was going to work. It turned out fantastic.”

The switch to no-till allowed the Thieschafers to expand their operation to 2,000 acres.

“No-till makes it so much simpler,” says Paul. “You eliminate spring tillage that can really make a mess out of a wet field in a hurry. It’s just a matter of pulling in the field, planting and coming back with spray.”

The Thieschafers no-till three-fourths of their corn and one-third of their soybeans. No-till corn is always planted first because this soil has more tilth from being in no-till for…

Premium content is for our Digital-only and Premium subscribers. A Print-only subscription doesn't qualify. Please purchase/upgrade a subscription with the Digital product to get access to all No-Till Farmer content and archives online. Learn more about the different versions and what is included.
KEYWORDS Brad Thieschafer Paul Thieschafer RoundUp Ready soybean Wet Fields

[Podcast] Regenerating No-Till Soils After a Season of Saturated Soil

Corn and Soybean Survival in Saturated and Flooded Soils