By Laura Barrera posted on April 1, 2014 | Posted in Nutrient Management

A survey of hundreds of no-tillers reveals they saw $1.68 worth of benefits for every dollar spent on gypsum applications, with the payback being higher with long-term use.

More often than not, the benefits of gypsum applications exceed the application cost, and the amendment can serve as a tool to mitigate drainage issues and increase yields, says a recent survey involving hundreds of no-tillers.

Batte shared the results at the 2014 National No-Tillage Conference in Springfield, Ill., this January, during a luncheon sponsored by Gypsoil.

The survey polled 362 active farmers, with 95% reporting they had no-tilled or used some form of conservation tillage in 2012, 2013 or both.

Farmers applied the highest percentage of gypsum to alfalfa acres, with two-thirds of alfalfa acres seeing application at a rate of 1,000 to 2,000 pounds per acre.

Growers producing corn, soybeans and wheat say they apply gypsum to about half of each crop, with the most common rate being 2,000 pounds per acre.

Alfalfa producers saw the highest yield increase with gypsum application, with short-term users (farmers who have only applied it three or four times) reporting a 7% increase in yield, compared to corn at a 4.8% and soybeans or other oilseeds at 3.6%. 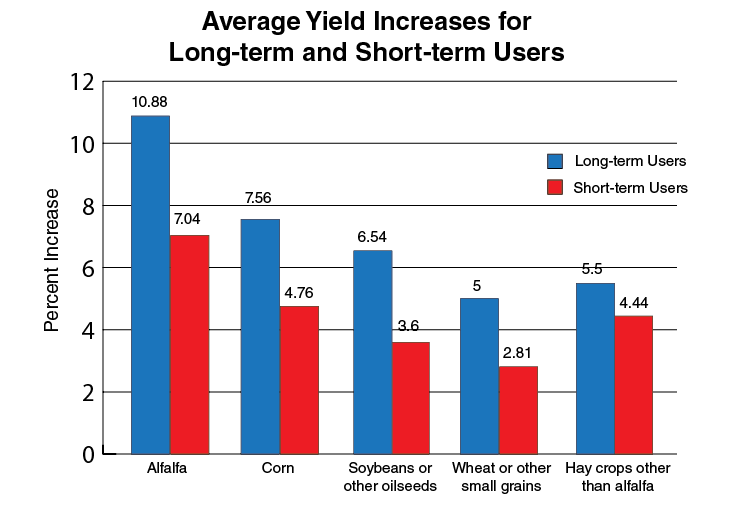 Long-term users — those who adopted gypsum use prior to…

Premium content is for our Digital-only and Premium subscribers. A Print-only subscription doesn't qualify. Please purchase/upgrade a subscription with the Digital product to get access to all No-Till Farmer content and archives online. Learn more about the different versions and what is included.
KEYWORDS D lynn forster Fertilizer use Gypsum Increased yields laura allen Marvin batte Ohio state university Ron chamberlain Soil balance