By Katherine Meitner posted on April 1, 2000 | Posted in Seeding & Planting

Not satisfied with 200-bushel corn, this no-tiller looked to the edge of his crop for solutions.

Jim House had to chuckle when asked how he gets 300-bushel corn yields. 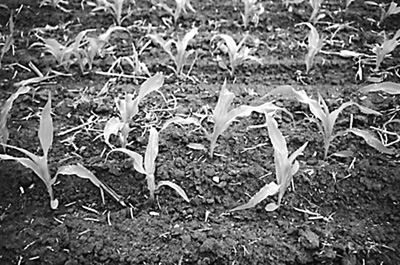 “There’s only one Jim House, and no one’s as crazy as me. At least, that’s what my neighbors say,” he says.

Crazy or not, this no-tiller from Port Stanley, Ontario, has devised a system of boosting corn yields from 140 to 302 bushels an acre. In fact, in one test plot, House got 400-bushel corn, but he’s not too excited about promoting that number.

“Right now, it’s just not realistic,” he says. “Maybe in a few years, we’ll work out the kinks. But I’m pretty happy with my 300-bushel per acre corn,” he smiles.

The old adage of the best yields being on the outside corn rows made House do some serious thinking. Since he’s 100 percent no-till and has been for 16 years, he knew it most likely didn’t have to do with the soil. So he began to look up for answers.

“The whole answer is sunlight,” he says. “The more sunlight you can get to the stalk, the healthier the stalk stays. They tell me that 60 percent or more of the yield is determined by the leaves below the cob. In a regular, solid corn field that’s planted in 30-inch rows, the light gets shut out on the bottom, so the bottom leaves die sooner.”

With this in mind, House came up with an ingenious idea. If the outside rows of corn produced better, why not have more outside rows? This…

Premium content is for our Digital-only and Premium subscribers. A Print-only subscription doesn't qualify. Please purchase/upgrade a subscription with the Digital product to get access to all No-Till Farmer content and archives online. Learn more about the different versions and what is included.
KEYWORDS High Corn Yield Jim House no-till corn Strip Farming sunlight

We're Not There Yet, But 300-Bushel Corn Yields May Be Typical Just 20 Years From Now

We’re Not There Yet, But 300-Bushel Corn Yields May Be Typical Just 20 Years From Now