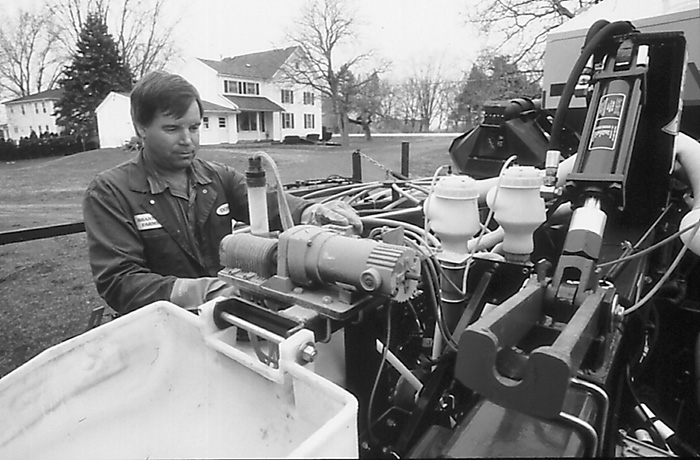 After sitting in on a no-till air seeder roundtable session during the 1998 National No-Tillage Conference, Donn Branton was primed for action. What he’d heard convinced him to consider a new way to achieve the precision planting necessary for attaining 100 bushel per acre yields of soft red winter wheat.
It didn’t take long after returning to his Leroy, N.Y., farm to settle on a Flexi-Coil 8000 No-Till Air Drill. The seeder is equipped with a Barton double-shoot opener allowing simultaneous, separate placement of seed and fertilizer.
The unit features an 18-inch beveled disc blade angled to cut through crop residue, penetrate the soil and form a slot for fertilizer. Using the same soil incision as the front blade, a second blade cuts at an opposite angle. Forming a new slot in the soil, this allows seed to be placed above and to the side of the fertilizer.

Branton also installed a unit allowing him to apply a protective fungicide coating to the seed as it passes through the drill’s hoses on the way to the seeding tool. Operated from an in-cab monitor/controller, the unit features a self-priming, peristaltic (squeeze) pump. It provides Branton with accurate coverage of the seed with on-the-go application of Raxil-Thiram fungicide.

Branton feels the no-till air drill and its special features reinforces his basic farming philosophy:
“Treat every crop as a major crop,” he says. “You only get one chance to manage the seed so it can take advantage of its…
To view the content, please subscribe or login.