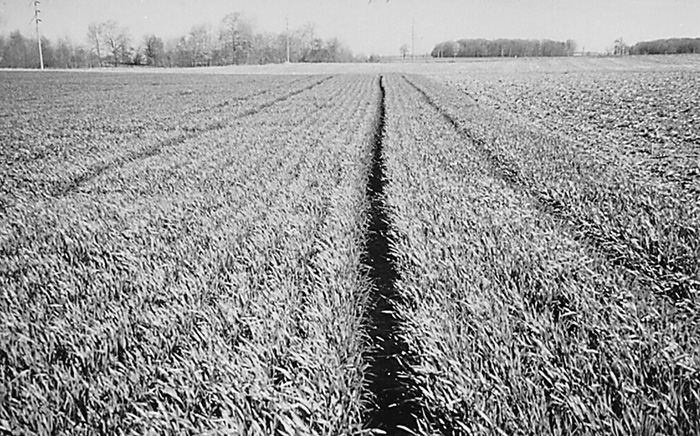 By Steve Prochaska posted on January 1, 2000 | Posted in Seeding & Planting

As the concepts behind conservation tillage becomes more complex, more no-tillers are looking to double their acreage and earning potential with intercropping.

A cropping system with the potential to increase farm income while hedging production risk is Modified Relay Intercropping (MRI). MRI is the planting of soybeans into standing wheat 20 to 30 days prior to wheat harvest. The goal of this planting date is to have a well established soybean plant 6 to 8 inches tall (V2-V4) at wheat harvest.

In the MRI system, two crops (wheat and soybeans) are harvested in the same year with the MRI system. However, because of the large difference in crop requirements, no-tillers can effectively hedge production and price risk in most years. Producers considering an MRI system should plan to grow wheat in such a manner that yield is not significantly reduced from conventional wheat systems.

Long-term research at Wooster and other locations in Ohio has shown MRI wheat will yield about 90 percent of conventional wheat that has not lodged with this system. Thus in any given year, when wheat can be grown successfully in a conventional system, it should also be successful in an MRI system.

Because of the high probability of growing at least an average wheat crop, farmers hedge their crop production risk in an MRI system (two different crops with different needs in one growing season) with the opportunity to also grow a crop of soybeans.

Soybean production in an MRI system is more speculative than wheat production due to the need for adequate rainfall in July and August. We have averaged 34 bushels of soybeans…

Premium content is for our Digital-only and Premium subscribers. A Print-only subscription doesn't qualify. Please purchase/upgrade a subscription with the Digital product to get access to all No-Till Farmer content and archives online. Learn more about the different versions and what is included.
KEYWORDS double-cropping intercropping Modified Relay Intercropping Steve Prochaska

Double Up No-Till Benefits By Cover Cropping For Forage