By Joel Armistead and Martha Mintz posted on April 1, 2014 | Posted in Equipment

Long-time no-tiller Joel Armistead uses precision technology and many other tools to dole out inputs and create a sleek, efficient no-till machine.

I was just a kid when my Dad had that Allis Chalmers no-till planter delivered and I watched him put it together. Eventually, I went on to build my own no-till planter. It’s got a few more bells and whistles than that first one, though. 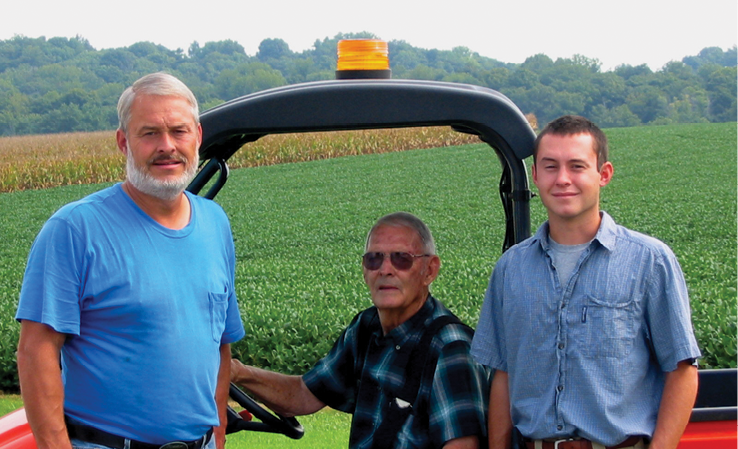 Prior to no-tilling, our farm was, of course, all plowed, disced, rolled and dragged to get ready for planting. My Dad stuck with that, but bought the no-till planter with the idea that he could get into double cropping by no-tilling soybeans directly into wheat stubble. We weren’t raising corn at the time, as the land we were farming in Tennessee wasn’t up to the task.

When we moved to Kentucky, we added corn to the mix and Dad started rethinking his tillage practices. He was plowing the corn stubble down to plant so he could seed wheat. But he started trying different things, switching to chisel plows, then rippers. We were still doing tillage, but with less and less disturbance. It took until the 1990s before I could convince Dad to no-till corn, too.

Our new farm in Kentucky was, fortunately, located very close to Howard Martin. There were several pieces that he designed that we were in the early stages of trying, and our location helped us succeed in our new no-till corn adventure. We were one of the first to use his…

Premium content is for our Digital-only and Premium subscribers. A Print-only subscription doesn't qualify. Please purchase/upgrade a subscription with the Digital product to get access to all No-Till Farmer content and archives online. Learn more about the different versions and what is included.
KEYWORDS Inputs Joel armistead Martha mintz No-till Precision technology Profits what I've learned from no-tilling

One Bold Move Leads to Decades of No-Till Success