By Frank Lessiter posted on August 1, 2001 | Posted in Crop Protection

Back in 1997, a number of Michigan farmers found high levels of white mold disease in their soybeans. This was especially true in fields planted with Roundup Ready soybeans where weeds were controlled with Roundup Ultra herbicide.

As a result, several studies were conducted by Michigan State University crop scientists to see if the high levels of white mold in Roundup Ready soybeans could be due to the glyphosate-resistant gene, herbicides, adjuvants, variety sensitivity, row widths or plant populations.

The research findings indicated that neither the glyphosate-resistant gene, glyphosate herbicide or adjuvants had any impact on white mold disease levels. The researchers also found that the most important factor influencing white mold in Roundup Ready soybeans was the variety that was seeded.

The Great Lakes GL2600 Roundup Ready soybean variety and its conventional near isoline, GL2415, were used in the research trials. When these varieties were evaluated for the impact of the glyphosate-resistant gene on white mold levels, disease levels were equal in both field and in greenhouse trials. This was also the case with Roundup Ultra sprayed at various rates.

None of the adjuvants used with the herbicide had any impact on white mold disease levels or S. sclerotiorum growth on soybeans. Yet at high application levels in the laboratory, several of the adjuvants actually inhibited the growth of this organism. 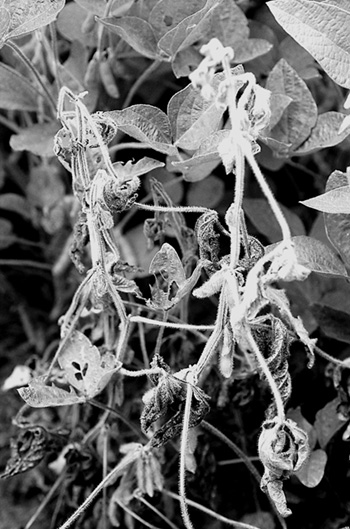 Another study compared three Roundup Ready varieties: Pioneer 92B71, an upright variety with a slightly open architecture; Asgrow 2701, a bushy variety; and…

What Does Weed Control Cost?