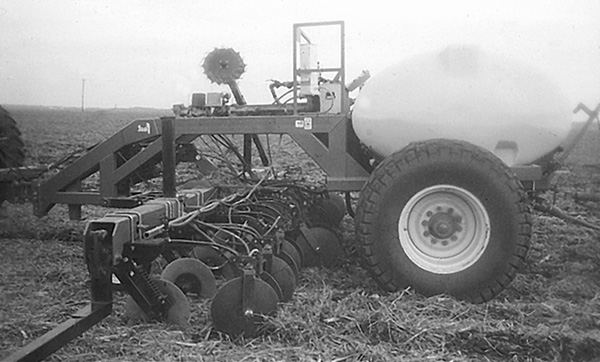 By Lynn Grooms posted on August 1, 2002 | Posted in Strip-Till Farming

Strip-Tilling since 1987, Cliff Roberts has learned a lot about what does and doesn’t work on his farm near Kentland, Ind.

One thing that Roberts has learned is that fall strip-tillage provides a little more margin for error than its spring counterpart. He does not recommend spring strip-tilling any deeper than you intend to plant seed and also advises against using spring-applied anhydrous in the strips ahead of corn. “It’s been done, but it’s also failed big time,” he says.

The key to strip-tillage, says Roberts, is fooling corn into thinking that it is growing in a tillage environment. “That’s what the strip is. We’re working a strip just wide enough to run the no-till planter down through,” he says.

Over the years, the Indiana strip-tiller has experimented with different equipment. He purchased flat markers that were designed for a John Deere planter. He also used an 11-shank DMI applicator borrowed from his local cooperative. But after 2 years, Roberts determined the combination of 11 shanks on a strip-till unit, an 8-row planter and a 6-row corn head on the combine would just not work.

“Even with row markers, I couldn’t make it happen,” he says. “I’d start out right on one side of the field. But by the time I got to the other side, I was totally out of whack.” Next, he built a toolbar strip-till unit out of an old chisel plow that cost next to nothing. He also spent $100 for a coulter…