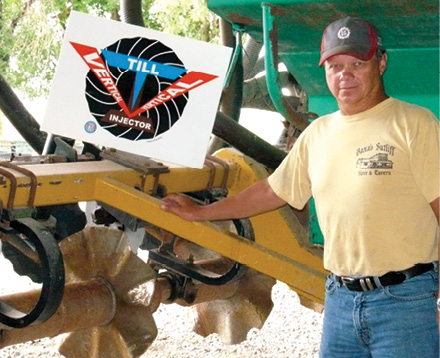 By Mark Parker posted on September 1, 2011 | Posted in Equipment

An Iowa no-tiller has developed a new tool that could help growers apply manure to fields without moving too much residue.

Injecting manure into soils with heavy cornstalk residue has long been a challenge for Iowa no-tiller Phil Reed.

Frustrated with available technology, the farmer and pork producer finally decided to design his own system — one that would slice through heavy crop residue in a manner compatible with no-till priorities.

The result is a vertical system that delivers high-speed, low-draft injection in high-residue environments.

The idea surfaced 2 years ago when Reed — a corn-and-soybean producer who also custom feeds 30,000 hogs annually — thought about the concept of pushing a coulter into the soil to create a reception void for liquid manure.

A no-tiller since 1985, Reed found it difficult to find a tool that would cut through heavy residue and seal the slot while leaving enough residue on the soil surface — and doing this with a machine that was both durable and affordable.

In late 2010, a prototype Reed developed hit the fields around Washington, Iowa, and commercial units are now available.

Reed’s VTI — Vertical Till Injector — clamps onto a toolbar mounted to the back of the liquid-manure wagon. Each row unit has a 22-inch, eight-wave notched blade to cut through residue, lift the soil and splay it apart.

A slanted hose from the tank places the manure 6 to 8 inches beneath the soil surface. Then, adjustable 18- or 20-inch containment wheels at the back of each row unit catch the displaced soil and residue to lay it back over the…

Premium content is for our Digital-only and Premium subscribers. A Print-only subscription doesn't qualify. Please purchase/upgrade a subscription with the Digital product to get access to all No-Till Farmer content and archives online. Learn more about the different versions and what is included.
KEYWORDS Heavy residue iowa low-draft injection manure injection mark parker Phil Reed Soil disturbance Vertical Till Injector