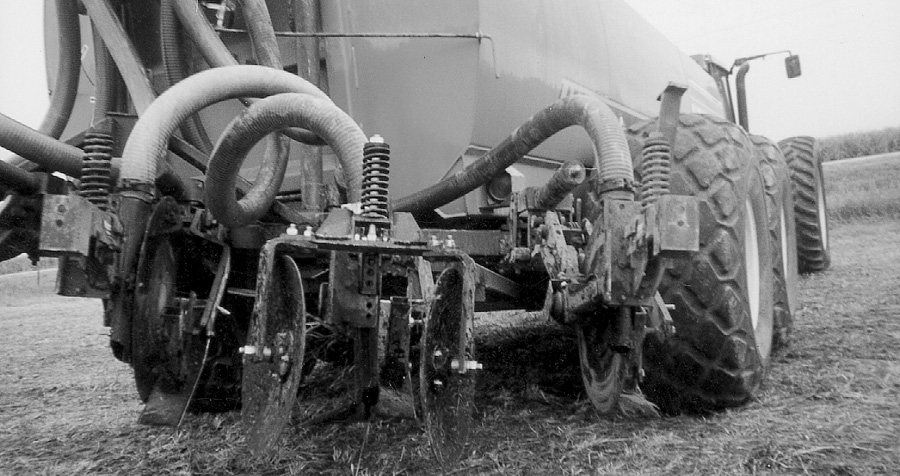 Filling In The Cracks With No-Till Fertility

By Lynn Grooms posted on May 1, 2002 | Posted in Nutrient Management, Soil Health

Paul Reed, his three brothers and father have been no-tilling corn since 1982 and soybeans since 1989. They no-till throughout the western side of Iowa’s Washington County.

Besides operating a sizable weaning-to-finishing hog operation near Washington, Iowa, they also custom manage a weaning-to-grower operation for another farm family that is located in the area.

With plenty of hogs and no full-time hired help, time is at a premium. Without no-till, there would be no time for the cropping operation, says Reed.

Over the years, the Reeds have pinpointed the most critical factors in their operation that influence no-till corn performance and have found solutions to any problems. What they have learned appears to be working well, as they enjoyed a 200-bushel-per-acre yield average on corn that was no-tilled last year on April 14.

One of the keys to good no-till corn performance is having accurate fertility guidelines developed from reliable soil test results. Reed advises fellow no-tillers to make sure they are aware of the specific extraction tests being used for testing your soils.

“Make sure you know which soil testing procedure your lab is using and how to interpret it,” he says. There are two extraction tests — the Mehlich 3 (known as the universal extraction test) and the ammonium acetate test.

The Mehlich 3 extractant test may not reflect accurately for all soil types. It is best used on high acid, highly weathered soils that are more characteristic of the East than the Midwest, says…

Finding The Right Fit With Fertility