By Ron Perszewski posted on October 1, 2003 | Posted in Crop Protection

The interaction of drift reduction agents, spray nozzles and pressure is critical to the coverage needed for weed control.

A survey of Illinois certified crop advisors — including custom applicators, growers and consultants — and related research reveal some dos and don’ts about managing spray drift.

Not surprisingly, the survey by Southern Illinois University weed scientist Bryan Young found that the most trusted method for avoiding drift is not spraying when it’s windy. However, the definition of “windy” varied from 5 to 20 mph. “Some don’t stop until the winds hit 20 mph; they probably have a lot of acres to cover,” Young says.

The other three most popular methods are the use of drift reduction agents (DRAs) in the tankmix, low-drift spray nozzles and low operating pressure. Another common measure is the use of buffer strips around fields. The survey found that few applicators use hooded sprayers.

The number of commercially available DRAs jumped to 49 this year from 28 in 1996, when the Roundup Ready products were introduced. “Many products are specifically intended for glyphosate products such as Roundup,” Young says. “We didn’t have any in ‘96, now we have 32.”

About a third of the crop advisors concede that their drift-reduction efforts have sometimes caused a loss in weed control. The problems appear to be spread among the drift agents, spray nozzles and low-pressure spraying. 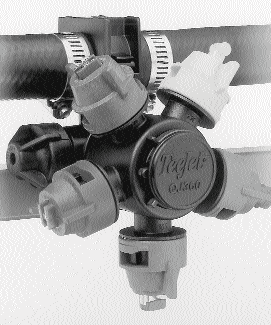 Young studied the effects of four different kinds of nozzles: the flat fan, “the standard nozzle out there”; the drift guard, “which has been out for several years but isn’t very popular”; the Turbo TeeJet; and the air…

A Practical Guide To Adjuvants Answers The Basic Questions

Tankmixes: The Future Of Weed Control Is Here