By Ron Perszewski posted on July 1, 2004 | Posted in Crop Protection

Every grower has heard the warnings, but there is still doubt about how prepared we are to face this crop-killer.

Asian soybean rust is a foliar disease, notes Glen Hartman, a plant pathologist at the University of Illinois who is heavily involved in preparing the U.S. for its arrival, “and tillage per se should not interact with rust incidence or severity.”

That means no-tillers, like their conventional tillage neighbors, stand directly in the path of the potentially devastating disease.

“Soybean rust is inevitably going to show up in the U.S. We escaped the bullet for the past growing season, but I won’t put any money on 2004,” warns Monte Miles, a plant pathologist for the U.S. Department of Agriculture’s Agriculture Research Service.

Though no one can be sure if this is the year, researchers and ag industry officials are unanimous about the inevitability of soybean rust’s arrival. The real question is, how ready will U.S. farmers be to cope with the potentially devastating disease?

Jim Peters, a fungicide brand manager for Syngenta Crop Protection who is watching the situation closely, worries that growers will miss the early signs of infestation because many don’t scout their fields often enough or closely enough. 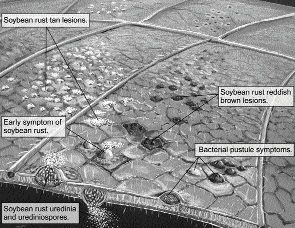 “A lot of them are in the habit of drive-by scouting,” he says, “but if you can see it from the road, you’re way too late.”

Premium content is for our Digital-only and Premium subscribers. A Print-only subscription doesn't qualify. Please purchase/upgrade a subscription with the Digital product to get access to all No-Till Farmer content and archives online. Learn more about the different versions and what is included.
KEYWORDS Disease fungicides pathologist research resistant rust soybean usda

Get Used To Threat Of Asian Soybean Rust