Switching from ridges to strips paid big dividends for this Ohio no-tiller, especially in wet conditions.

Joe Garland examines the golden corn stalks that an earthworm has carefully dragged into its hole. The Ohio farmer finds earthworms are just one benefit of strip-tillage.

The main benefit of clearing a 6- to 8-inch- wide strip before planting corn is getting in the field sooner. During 2003’s soggy spring, strip-tilling really shined when done just ahead of planting.

Garland started planting corn and soybeans on April 14. “We planted for a few days and then we were waiting for it to dry out,” says Garland, who farms with brothers Chris and Jim near Washington Court House, Ohio.

Although they’d never before tried strip-till in the spring, on April 26 the brothers pulled the strip-till tool through the field to help dry the soil. “The ground was drying so fast that we had to come right behind with the planter,” explains the 43-year-old farmer. 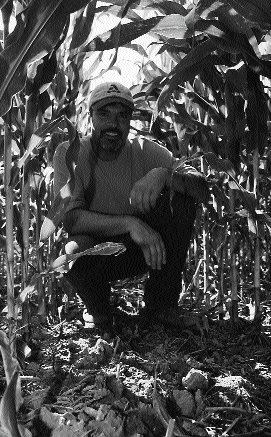 Garland planted all but 40 acres of corn last spring, even though many other farmers in the area ended up collecting preventive planting payments from the government. “We planted in April and May, and then it was late June before we could get the wettest farm planted,” he says.

Garland had been strip-tilling since 1999, but was told the practice wouldn’t work in the spring. “We were warned that we’d have too many air pockets,” he says. The corn and soybean grower followed the same guidelines as for fall strip-tilling, running the tool 6 to 8 inches deep. He avoided running any shallower…

From Seeds to Strips, Variety Goes the Distance