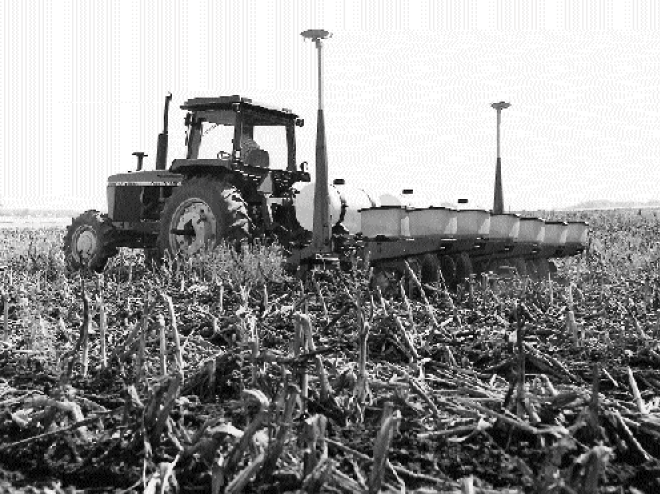 By Ron Perszewski posted on August 1, 2004 | Posted in Equipment

Do you know the differences between bias and radial tires? Which type is less likely to be punctured by field stubble? Do you understand the ins and outs of manipulating air pressure in tractor tires to avoid soil compaction?

Scott Sloan does, and he’d like no-tillers to know, too. Sloan is vice president of engineering and technical services for Titan Tire Company of Des Moines, Iowa, one of the country’s largest suppliers of agricultural tires. He’s also worked with Firestone Tire Company, has examined numerous tire issues faced by no-tillers and offers the following advice.

It begins, he says, with understanding the differences in bias versus radial tire design and what they mean to your wallet and your fields.

In a bias tire, the body chords beneath the tread run on an angle, or bias, of about 45 degrees from one bead, or edge, to the bead on the other side of the tire. The chords run in opposite directions in successive layers, or plies, giving the tire its strength. Stabilizer belts are added over the bias chords. This chord pattern makes the sidewalls relatively stiff and resistant to flexing, and the rigid tire maintains a comparatively small footprint.

“Basically, bias tires have a crisscrossing pattern in the sidewall and in the tread, and the tread and the sidewall act as one. It’s like a big, tough beach ball,” Sloan says.

The advantage to a bias tire, he says, is that there are fewer manufacturing steps than with…