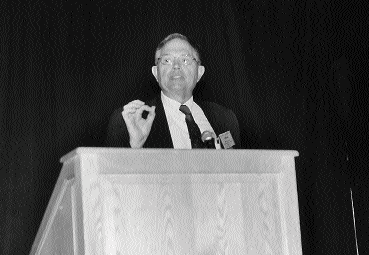 By Ron Perszewski posted on November 1, 2004 | Posted in Nutrient Management

Dr. Nitrogen, as Alfred Blackmer is sometimes called, believes the traditional guidelines for nitrogen applications often result in too much fertilizer at the wrong time.

Currently, farmers justify their nitrogen applications by pointing to rules of thumb that have them applying 150 pounds per acre or more for corn, according to Blackmer.

“Most producers are doing that. They are at 150 pounds or more, and the question is, why?” he says.

“Forget the guidelines. The guidelines are wrong,” contends Blackmer, an Iowa State University fertility specialist who has studied hundreds of fields in on-farm research over the past decade.

“The research we’ve done suggests that the guidelines might be based on a good idea, but they really are not valid. Scientifically, they are not going to hold up in the future,” he says.

He says he and his colleagues “are not making ourselves very popular in some circles. But there are lots of people making recommendations to farmers and calling them best management practices. Who’s checking? How do you know those are really best?”

He adds, “We found that you lose far more nitrogen than you think, especially in no-till fields. If you put your fertilizer down early, you are likely to lose it. We always knew you could; now we’re showing how much and how often.”

But, he says, “You can avoid this simply by delaying applications. That’s what’s different…

Premium content is for our Digital-only and Premium subscribers. A Print-only subscription doesn't qualify. Please purchase/upgrade a subscription with the Digital product to get access to all No-Till Farmer content and archives online. Learn more about the different versions and what is included.
KEYWORDS Alfred Blackmer Dr. Nitrogen fertilizer guidelines Iowa state university nitrogen timing

Guidelines for Crediting Nitrogen — or Not — in Fallow Fields

Precise Fertility Guidelines For Corn Can Save You On Nitrogen

For The First Time, Precise Fertility Guidelines For Corn Can Save You 40 To 50 Pounds Nitrogen With Continuously No-Tilled Ground