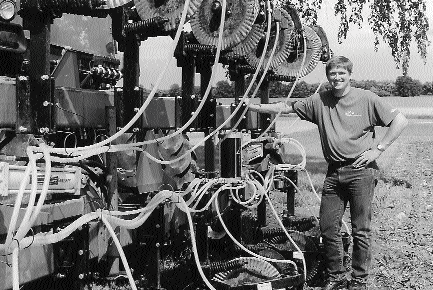 The winner of an Exactrix precision fertilizer applicator at last winter’s National No-Tillage Conference put it to good use this year.

Some might consider Dan Peyton a “weekender” farmer, as he divides his time between no-tilling 300 acres of corn and soybeans and a full-time job at a nearby printing firm in Long Prairie, Minn. But in the 6 years he’s been no-tilling, Peyton has been named Todd County’s Conservation Farmer of the Year (2000), while coaxing up to 149 bushel-per-acre yields from short-season corn varieties in highly-erodible sandy loam soil.

“We average right around 130-bushel corn and 34-bushel soybeans,” says Peyton. He converted the family’s hilly farm from hay to row crops when he took it over from his father, a cattleman, in1998. As far as he knows, he’s the county’s only100 percent no-tiller.

You won’t find any new equipment on the Peyton farm. In fact, his main tractor is a John Deere 4440 dating to the early 1970s. Peyton no-tills corn and soybeans with a renovated John Deere 7000 planter, now equipped with new single disc openers and an assortment of no-till attachments.

A lot of the time that no-till saves him is spent keeping equipment in top shape and adapted to his permanent no-till system. The handyman was pleased when his name was drawn for an Exactrix Delta P manifold door prize at the 2004 National No-Tillage Conference in Des Moines, Iowa.

“Winning the manifold was the incentive I needed to build a 12-row sidedress applicator for 28 percent liquid nitrogen. Being able to sidedress nitrogen is a better way to utilize it on my farm…