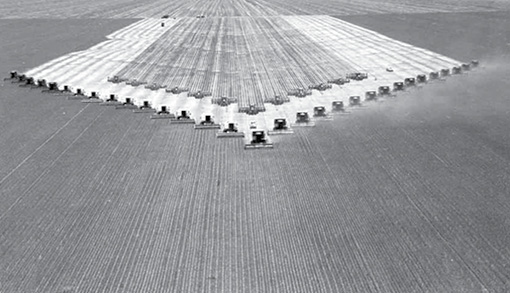 By Frank Lessiter posted on June 1, 2005 | Posted in Seeding & Planting

In the late 1960s and early 1970s, we taught Brazilian farmers how to no-till successfully. Now, they’re kicking our butts in the worldwide export market due to lower cropping costs and a tremendous boost in no-tilled acres.

When several University of Kentucky agronomists and others headed to South America 35 years ago to show farmers there how to no-till, little did they realize that demonstrating this new technology would eventually turn Brazil into a major player in the world food market and a serious competitor for our grain exports. It’s not likely that they foresaw the eventual impact this would have on prices being paid to American farmers today.

Already among the largest ag economies in the world, Brazil has the potential for significant crop growth over the next 5 to 10 years, analysts say. Relying on extensive use of no-till, Brazil’s farmers are clearing and cultivating huge chunks of brushland and forests. In fact, government officials anticipate that the country could eventually see as much as 150 percent growth in cropped acres, equaling an area nearly the size of our entire Corn Belt!

While most rural areas of Brazil suffer from a series of major problems — such as a lack of railroads, roads and waterways to move crops to the ocean for export and an uncertain economy — it’s likely that these concerns will be overcome and lead to a bright future for agriculture in Brazil.

Not All Wine And Roses

Brazilian farmers have more concerns about the weather, economic conditions and political ramifications than do you do.

“Brazil has become an agricultural power house and may be on its way to serving as the bread basket of the world,” says Charlie Rentschler, a financial…

Attitude Is The Most Important Prerequisite For No-Till Success