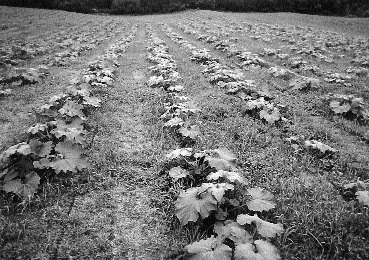 With small fields, rocks, hills and many crops, this Maine grower cashes in on the many benefits of no-tilling

When I studied pomology at Cornell University in the early 1980s, I didn’t envision that my future business success would hinge on growing pumpkins, squash and sweet corn.

And I certainly would not have believed I would be successfully growing these and other vegetables with a continuous no-till system in Maine’s rocky, forest soils.

Being a first-generation farmer was probably an advantage when it came to adopting no-till. My parents were both school teachers, so I didn’t face family tradition when I decided to try a new method of farming. I’d gained some production experience raising sweet corn for college money and I also managed a small orchard before going into farming full time.

In 1991, my wife Susanne and I bought the 64-acre County Fair Farm, the site of the original Lincoln County Fair more than a century ago. We’ve since expanded to 250 acres and market numerous vegetable crops both to wholesale and retail buyers.

I first no-tilled pumpkins in 1989 after hearing Dale Riggs, a New York area extension specialist, talk about the potential benefits. I had really good success that first year – but it took nearly 6 years after that to come up with a no-till system that is nearly trouble-free. I first designed a 2-row strip-till cart…

Premium content is for our Digital-only and Premium subscribers. A Print-only subscription doesn't qualify. Please purchase/upgrade a subscription with the Digital product to get access to all No-Till Farmer content and archives online. Learn more about the different versions and what is included.
KEYWORDS Andy WIlliamson cabbage cucumbers gourds green beans Jefferson maine Pumpkins rotations squash sweet corn what I've learned zone-tilling

Longer No-Till Rotations Were The Answer