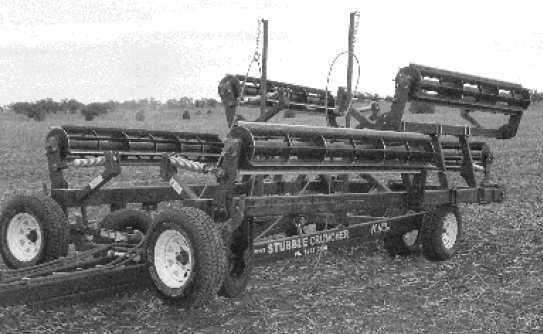 Australian no-tiller’s struggle with residue leads to a new machine that is sweeping across the continent.

Inspiration hit no-tiller Colin Harper as he stared at the effects of a bulldozer’s track on the ground, and his problems with planting into canola stubble were soon overcome.

Harper built a prototype machine to manage his residue by combining the concept of the rolling motion of the bulldozer tracks with cutting edges. After refining the design and calling the device a Stubble Cruncher — “The name says it all,” he says — he is producing the machines to cut canola stubble into 6-inch lengths.

And, he notes, the Stubble Cruncher also knocks down and splits open cereal stubble, allowing moisture and microbes in to speed up the decomposition of the straw, thus easing the planting of the next crop.

Harper, who no-tills in New South Wales, Australia, began showing his machine to other growers at field days. It was an immediate hit and is now being used to crunch stubble throughout Australia. The machine is not yet available in North America, but Harper is looking for an importer willing to bring the device here.

Although understandably pleased with the reception for the Stubble Cruncher, Harper’s first thought was to make his own no-tilling simpler by winning the battle with the canola residue.

“I had resorted to mulching the residue with a slasher, which gave terrific results but was very expensive and slow,” he says. “I started thinking there had to be a better way.”

That’s when he stumbled across the bulldozer tracks. “I played around with a few different…

Premium content is for our Digital-only and Premium subscribers. A Print-only subscription doesn't qualify. Please purchase/upgrade a subscription with the Digital product to get access to all No-Till Farmer content and archives online. Learn more about the different versions and what is included.
KEYWORDS Australia canola Colin Harper Equipment Innovations invention Stubble Cruncher