Rotations are the key to turning out good no-till profits in limited rainfall areas.

Art Schultheis relies on no-till to get the best possible return from his 1,100 acre operation, which receives an average annual rainfall of only 18 to 20 inches. 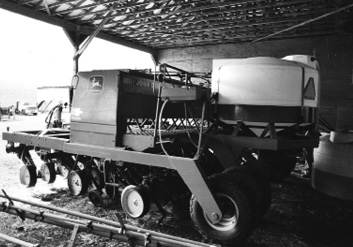 He direct seeded his first field into bluegrass sod in 1977 and hasn’t plowed any ground in 17 years. His motivation to move to no-till was to eliminate bluegrass from the rotation, improve soil conservation efforts and reduce cropping costs.

When dealing with pea or lentil residue, Schultheis uses a combine equipped with a straw chopper and chaff spreader and direct seeds with a John Deere 750 no-till drill.

While he maintains that he still doesn’t have all the answers, he has a 10-year average winter wheat yield of 99 bushels per acre.

“But once you get wheat yields over 75 bushels per acre, getting the stubble to flow through the 750 drill is a problem,” says Schultheis. “That’s why we mow the stubble with a Schulte unit, being careful to blow all the residue off the mower before…

Can You Use Vertical Tillage Without Destroying No-Till?