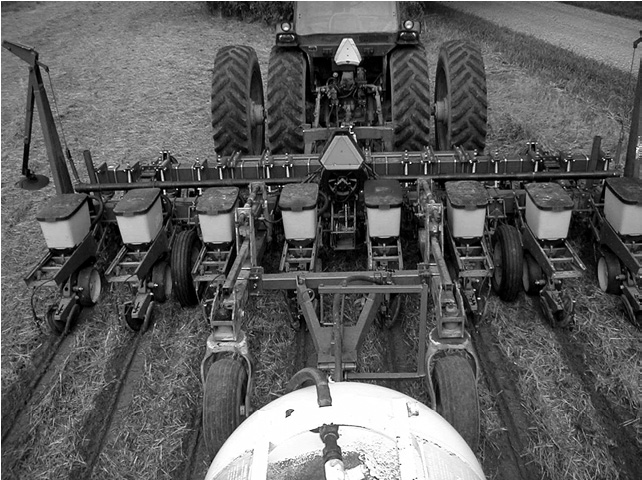 By Mark Moore and David Moeller posted on May 1, 2007 | Posted in Equipment

Not satisfied with what the market had to offer, this Missouri no-tiller designed his own strip-till machine and was rewarded with higher yields and freedom from compaction worries.

They say necessity is the mother of invention. For Paul Lanpher, a persistent desire for equipment that simply worked better on his farm led him to develop equipment designed for his no-till operation. It’s a desire that he dreamed up about 7 years ago. And after several modifications and updates, Lanpher is excited about his strip-till Dream Machine.

Lanpher farms near Advance, Mo., growing mostly wheat, soybeans and corn. He double-crops the wheat with soybeans, following with corn the next year. It’s a rotation that’s worked well for his 50-plus years of farming.

Lanpher changed over to no-till about 15 years ago. While he was happy with his results, he noticed that the continual traffic on his fields, due in part to his wheat-soybean-corn rotation, was starting to cause compaction problems.

“In my double-crop system, there’s a lot of wheel traffic from spraying, planting and combining,” he says. “That’s when I started looking at some strip-till options.”

He thought the equipment on the market that he researched didn’t exactly meet his needs, so Lanpher set out to design his own strip-till rig that would do exactly what he wanted it to do.

Lanpher’s Dream Machine spreads nitrogen with a Conservation Jet (C-Jet) in a wide band under the seedbed. The knife and sweep loosen a strip of soil about 10 inches wide and 6 to 8 inches deep. Two rolling cultivator gangs run on the ridge of soil behind the C-Jet, chopping and settling the seedbed. If needed, the rolling…

Premium content is for our Digital-only and Premium subscribers. A Print-only subscription doesn't qualify. Please purchase/upgrade a subscription with the Digital product to get access to all No-Till Farmer content and archives online. Learn more about the different versions and what is included.
KEYWORDS advanced C-Jet Conservation Jet Double-crop double-cropping Missouri Mo, Paul Lanpher strip-till strip-tilling Stripper-Scratcher