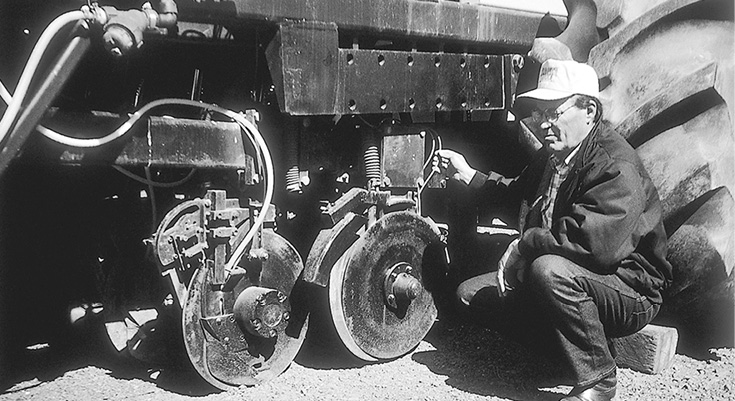 By Frank Lessiter posted on May 1, 2007 | Posted in Residue Management

Besides slashing soil losses, no-till residues can trim fertilizer bills by $50 in a 3-year rotation.

LIKE MANY GROWERS, John Aeschliman has seen plenty of benefits from direct seeding. No-till is referred to as direct seeding in his northwest area of the country, and the Colfax, Wash., grower finds it’s especially important for conserving moisture and combating soil erosion.

Aeschliman and his son direct seed 4,000 acres on slopes that are as steep as 60 percent with limited rainfall. He’s been direct seeding for more than 30 years in what is known as the Palouse area of eastern Washington and Oregon and western Idaho that is famous for producing extremely high wheat yields with limited moisture.

When Aeschliman took over the multi-generation family operation, he decided there had to be a better way to farm than with intensive tillage and a fallow program. “The amount of erosion that still occurs in our area is incredible, but not in our operation since we switched to direct seeding,” he says. “You can be really great about taking care of farming’s resources, which is stewardship. But you also have to consider economics because you have to stay in business. And direct seeding lets us do both,”

The Aeschliman operation is spread over a 20-mile area where annual rainfall ranges from 15 to 20 inches. Aeschliman relies on standing stubble to hold valuable winter snows to recharge the soil’s water table.

Premium content is for our Digital-only and Premium subscribers. A Print-only subscription doesn't qualify. Please purchase/upgrade a subscription with the Digital product to get access to all No-Till Farmer content and archives online. Learn more about the different versions and what is included.
KEYWORDS Colfax Corn residue direct-seeding fertilizer John Aeschliman Management nutrient residue slopes Wash Washington

The Value of Grazed Corn Residue for Crop and Cattle Producers