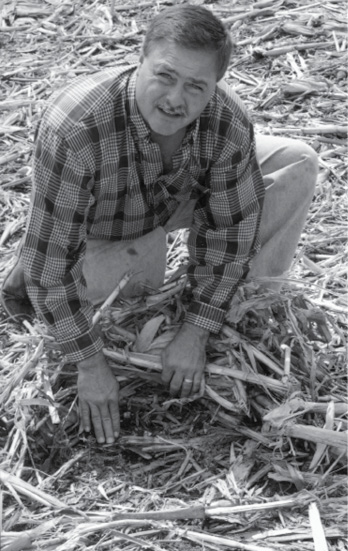 By Frank Lessiter posted on January 1, 2008 | Posted in Nutrient Management

Having no-tilled for 8 years, Tim Goodenough has moved away from using anhydrous ammonia, 28 percent nitrogen and urea as nitrogen sources. Since 2005, he’s successfully used the ESN (Environmentally Smart Nitrogen) product. This polymer-coated nitrogen is a slow release product that is activated by moisture and heat, says the West Salem, Wis., grower who no-tills 1,300 acres.

While the product comes with a 15 to 20 percent higher cost, Goodenough says its advantages include fitting well in a one-pass application system, being able to be spread when the ground is still frozen, requires no incorporation and is readily suited for broadcasting on no-till ground.

“There have been some issues with other farmers who haven’t been successful with this product, but it has worked well for me with our weather conditions,” he says. “I really like being able to apply it in a single pass and having the slow-activated product stay in the ground and provide a full season’s worth of nitrogen that can really do a good job in boosting yields.”

He was previously using regular urea with a nitrogen stabilizer. “But it never seemed like we could get a full season of nitrogen usage in two passes,” he says. “We always had to do a two-pass system with our previous 22-inch rows.”

Two years ago, he switched to 15-inch corn and soybean rows for the first time and the one-pass nitrogen application program worked well.

5 Questions to Consider for Nitrogen Applications