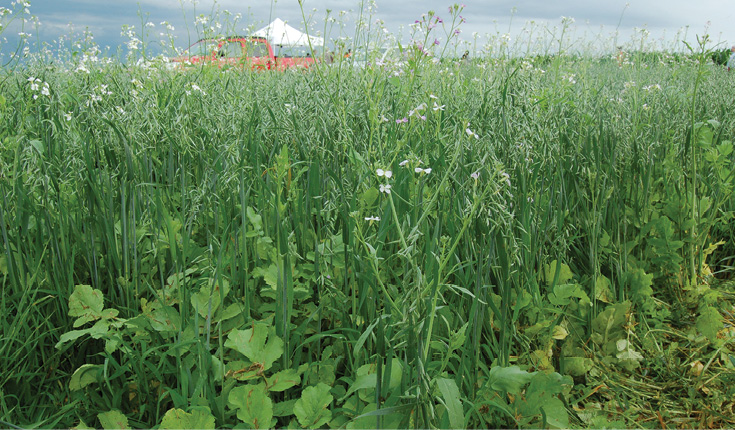 By Laura Barrera posted on September 1, 2013 | Posted in Cover Crops

Steidinger says the benefit of increased water infiltration was seen almost immediately after he seeded radishes, when a wet spring came along. He found no standing water on a flat farm that normally didn’t drain well, which he attributes to the radishes’ taproots that went down about 32 inches.

The soil-loosening abilities of radishes have also allowed Steidinger to expand no-till practices to 300 acres on his farm in Fairbury, Ill., where the cover crop has been seeded.

But finding the right management system for these brassicas can take some time. Steidinger admits it was a 3-year process to get the details worked out. Timing, pH levels and the presence of other cover crops can affect how radishes fit into a no-tiller’s cover-cropping system.

Timing Key. One of the first things a no-tiller should consider when seeding radishes is the seeding date.

Steidinger says timing was one of the initial challenges he faced. Producing corn, soybeans and wheat, he only seeds radishes with a seeder after his wheat crops because he found they didn’t develop as much as he preferred after corn and soybeans.