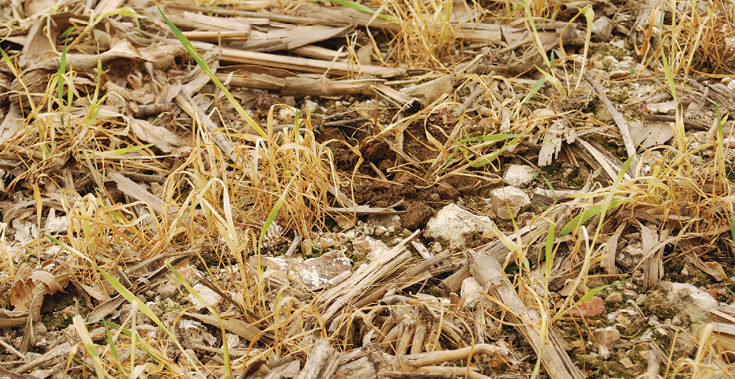 When Dave McLaughlin took over his wife's family farm in 1994, he decided to take the conservation-tillage practices his father-in-law implemented a little farther.

He started by no-tilling his forage seedings and small grain crops. By 1999 the entire farm had been transitioned to no-till.

While the timesaving benefit of no-till was McLaughlin’s original motive for parking his moldboard plow, the practice has taught him to view farming as a system that feeds the soil — one that consists of no-till, cover crops and manure.

McLaughlin no-tills 425 acres of crops near Elliottsburg, Pa., with 2013’s corn (silage and shelled) on 150 acres, soybeans on 125 acres, double-cropped soybeans after barley on 40 acres, barley on 60 acres and the remainder in alfalfa or grass hay.

The crops are primarily for the livestock operation that his son now manages, and he sells any excess grain.

Cover crops have served as a valuable tool to take his no-till system another level. McLaughlin first started working with them 28 years ago for erosion control on his hilly fields in south-central Pennsylvania, using cereal rye on corn silage ground. But he’s now seeded covers on his entire farm for 3 consecutive years.

His focus with cover crops now is to feed earthworms and soil microorganisms by providing living roots as many months of the year as possible.

Premium content is for our Digital-only and Premium subscribers. A Print-only subscription doesn't qualify. Please purchase/upgrade a subscription with the Digital product to get access to all No-Till Farmer content and archives online. Learn more about the different versions and what is included.
KEYWORDS Dave mclaughlin laura allen Manure application Microbial livestock No-till fields Pennsylvania Soil health Worms

Getting a Better Gauge on No-Till Soil Livestock