Sept. 24, 2013 — Palmer amaranth (Amaranthus palmeri) has garnered much attention recently in both academic discussions and popular press releases, and with good reason.  Among the weedy species of Amaranthus, Palmer amaranth has the fastest growth rate and is the most competitive with the crops common to Midwest agronomic cropping systems.  Soybean yield losses approaching 80% and corn yield losses exceeding 90% have been reported in the peer-reviewed scientific literature.  Palmer amaranth can be effectively managed in Illinois agronomic crops, but the greatest likelihood for successful management is with systems that employ multiple effective management tactics.  Palmer amaranth is perhaps the personification of a weed species that requires an integrated management approach.

Unlike waterhemp, Palmer amaranth is not indigenous to Illinois.  Palmer amaranth evolved as a desert-dwelling species in the southwestern United States, including areas of the Sonoran Desert.  However, genotypic and phenotypic adaptability have allowed Palmer amaranth to expand its distribution and colonize the vastly different agricultural landscapes across much of the eastern half of the United States.  The presence of Palmer amaranth in agricultural landscapes of the eastern United States is perceived by some to be only a recent phenomenon, but Dr. Jonathan Sauer, noted expert of Amaranthus taxonomy, noted in 1957 that, “It looks as if there has been recent and substantial northeastward expansion of A. palmeri resulting in its present wide area of cohabitation with interior species,” (Sauer 1957).

Recent research conducted in Illinois by Dr. Adam Davis, USDA-ARS plant ecologist at the University of Illinois, has examined these important questions.  Results from these experiments have demonstrated that there are few landscape-level barriers to the establishment of Palmer amaranth populations in Illinois, and that these populations, once established, are competitive with crop species.  In other words, these results indicate that it’s not a question ofif Palmer amaranth will become established in Illinois, but rather when and where it will become established. 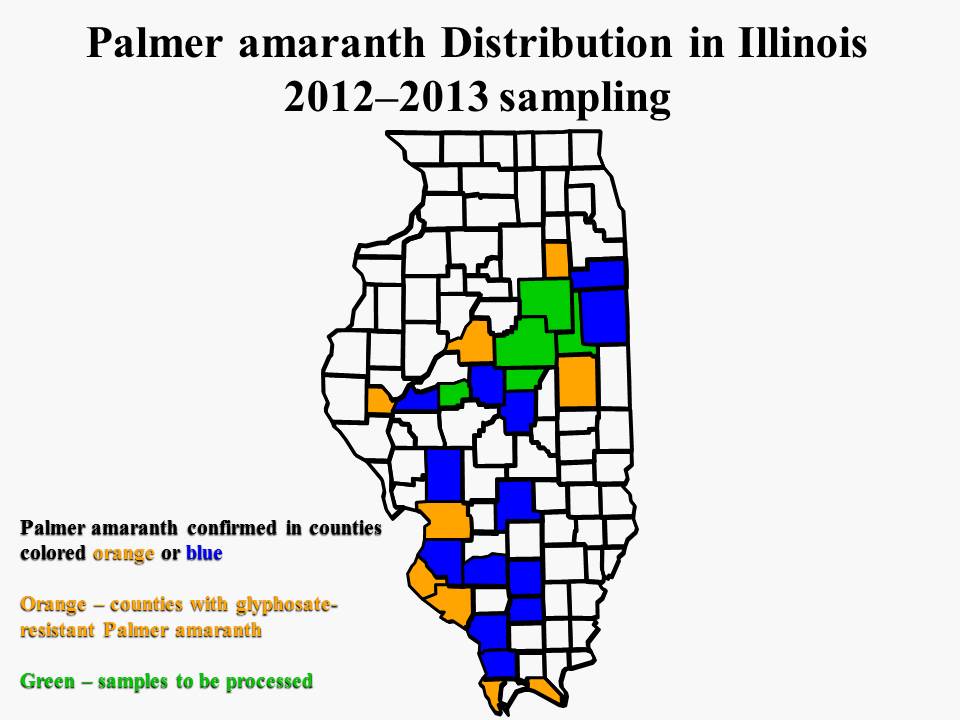 Similar to female waterhemp plants, female Palmer amaranth plants produce an abundance of seeds.  These small black seeds are easily moved within and between fields in myriad ways, including harvesting and tillage equipment.  If you identify Palmer amaranth in one or more fields, what can you do this fall to limit movement of the seed?  The following suggestions were developed by weed scientists in Illinois to help curtail the movement of Palmer amaranth seed:

2) Mark or flag areas where Palmer amaranth plants have produced seed.  These areas should be intensively scouted the following season and an aggressive Palmer amaranth management plan implemented to prevent future seed production.

3) Do not mechanically harvest mature Palmer amaranth plants with crop harvesting equipment.  Physically remove the plants immediately prior to harvest and either leave the plants in the field or place in a sturdy garden bag and remove the plants from the field.  Bury or burn the bags in a burn barrel as soon as possible.

4) Fields in which Palmer amaranth seeds were produced should NOT be tilled during the fall or following spring. Leaving the seeds near the soil surface increases the opportunities for seed predation by various granivores.

Be Wary of Palmer Amaranth When Purchasing Used Combines